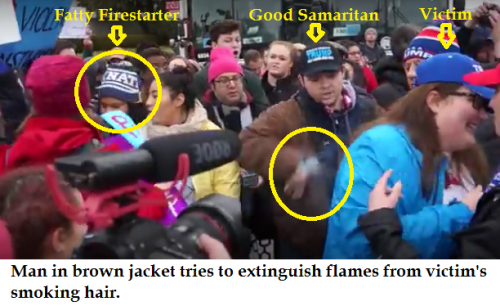 The United States of America was founded as a republic — a representative democracy — wherein citizens make political decisions and resolve our political differences via the ballot and civil debates, not violence or the threat of violence.

On January 20, 2017, at an anti-Trump protest in Washington, D.C., a woman set fire to the hair of a Trump supporter. Fortunately, an alert good Samaritan quickly extinguished the fire.

For the purpose of this post, the woman will be referred to as “Fatty Firestarter” (h/t FOTM‘s Lola).

Setting someone’s hair on fire is battery — an intentional unpermitted act causing harmful or offensive contact with the “person” of another. According to the legal dictionary:

Battery is both a tort and a crime. Its essential element, harmful or offensive contact, is the same in both areas of the law. The main distinction between the two categories lies in the penalty imposed. A defendant sued for a tort is civilly liable to the plaintiff for damages. The punishment for criminal battery is a fine, imprisonment, or both. Usually battery is prosecuted as a crime only in cases involving serious harm to the victim.

The identity of the woman who set fire to the hair of a Trump supporter has been uncovered. Let this be a lesson to anyone who thinks they can get away with criminal wrongdoing in our time of ubiquitous cell phone cameras, the Alternative Media, and an army of ever-ready citizen sleuths.

This post is a presentation of the evidence uncovered in social media that Fatty Firestarter most likely is Norma Zahory. The evidence is comprised of:

To begin, Norma Zahory’s friends recognize her as the woman who set fire to the Trump supporter’s hair.

(1) Norma Zahory acknowledges to a Facebook friend that she is Fatty Firestarter:

(2) In a tweet, a friend named Portia Diaz cheers Zahory for setting fire to the Trump supporter’s hair (“cooking bacon at the rally”):

(3) Photos of Zahory posted to her Facebook page show that she is Fatty Firestarter (I drew the yellow circles around Zahory):

Below are comparisons of the faces of Fatty Firestarter and Norma Zahory, which show they are the same person (note that the photos of Zahory were taken at various times/years before the Jan. 20, 2017 incident):

Norma Zahory lives in Fairfax, VA near D.C., and works for a non-profit organization, Communities In Schools, which describes itself as “the nation’s largest and most effective organization dedicated to keeping kids in [public] school and helping them succeed in life” — whatever that means.

Communities In Schools is funded by the following institutions:

Dale Erquiaga is the president and CEO of Communities In Schools.

Here’s contact info. for Communities In Schools for you to ask why they have a criminal on their staff: