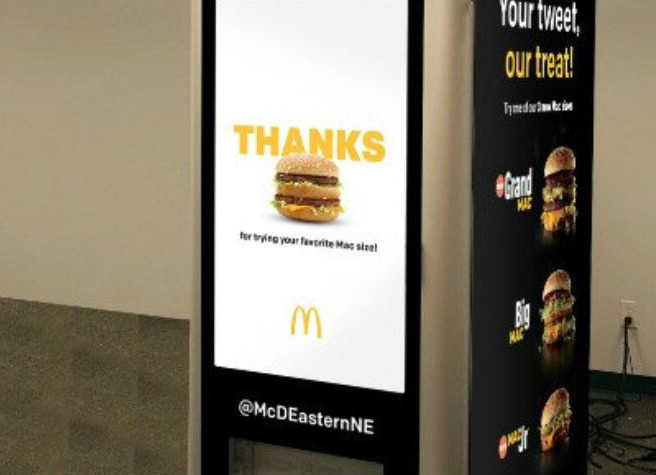 Everyone who’s seen the ominously accurate comedy, Idiocracy, remembers the Carl’s Jr. ATM that would, rather terribly, dispense fast food. Well, now they are a reality.

McDonald’s announced this week that they are giving away free Big Macs for people to review their new Big Mac ATM Machines.

The automated burger dispensary is popping up in one location, for one day only, on Jan. 31, according to the Boston Metro.

At the touch of a screen, customers can choose between three sizes of Big Mac, which will come out of the ATM with no human help. Participants will need to tweet out their experience to receive the free meal.

While the mainstream media is reporting on the fact that McDonald’s is merely giving away free Big Macs, they are missing the entire point of why that machine exists — the minimum wage.

As the political class continues to deceive their voting base with skewed economic policy by continuing to promote and legislate a $15 minimum wage, businesses are reacting — and the Big Mac ATM is the latest proof of that reaction.

Say what?! A Big Mac ATM machine, where you can order real Big Macs, is coming to the Pru/Copley on January 31st. https://t.co/fjMZcrLpr7 pic.twitter.com/MGRxplpsRI

Before you dismiss this article as some ‘right wing rant against minimum wage’, please consider the following.

If the minimum wage was a successful means of boosting income, we could simply set it at $25 an hour and make everyone rich. Unfortunately, it doesn’t work that way.

As wage prices increase, so does the price of the end product of the individual company. A company cannot continue to sell a product for a low price if the cost of their labor suddenly shoots up. The result of such an increase in labor, is an immediate increase in the cost of living, due to higher prices for consumers — which, by the way, immediately offsets any perceived increase in income derived from the initial hike in labor cost.

Aside from the spike in living costs derived from minimum wage laws, as shown in study after study, increasing the minimum wage always increases unemployment.

When companies are forced to pay higher wages for lower-skilled jobs, those companies eliminate those jobs altogether. Eliminating entry level jobs reduces the ability of individuals to garner the necessary ‘job experience’ required by future employers, thereby decreasing the possibility of ever acquiring a decent job.

In spite of the myriad of evidence showing the ill-effects of fixing prices in a market economy, politicians, including Donald Trump, continue to champion this terrible idea. For the last decade, economists have warned against such dramatic increases in the price of labor, and now those warnings are coming to fruition.

In a reaction to the recent minimum wage increase victories, those who provide many of the low-skilled jobs in the labor market have reacted. Last year, McDonald’s announced that it has begun to test self-service kiosks — because a robot’s minimum wage is exactly $0.

In response to the minimum wage hikes across the country, Wendy’s announced last year that the franchise will be making available “labor-saving technology” in its 6,000 plus stores across the country. While some franchise locations have been raising the price of food to offset the mandatory pay increase for employees, the costs are becoming too high. They are now making available to all franchise owners self-service ordering kiosks that will inevitably eliminate tens of thousands of jobs.

Unfortunately, in spite of the best intentions of the champions of minimum wages, high pay and cheap products do not go hand and hand.

Aside from the countless economists who predicted such reactions to forced wages, Etan Cohen, who co-wrote the satirical movie turned documentary, Idiocracy with Beavis & Butthead creator, Mike Judge, in 2006 — predicted, with incredible accuracy, the future of fast food in today’s rigged economy.

Welcome to the future.

If the economic effects of minimum wage aren’t enough to convince you, perhaps you should consider the racist background of such laws. As Andrew Syrios points out, Americans have no clue about the racist intentions and subsequent effects of the original minimum wage.

When Apartheid was collapsing in South Africa, the economist Walter Williams did a study of South African labor markets and found that many white unions were seeking to increase the minimum wage. He quotes one such union leader as saying “… I support the rate for the job (minimum wages) as the second best way of protecting white artisans.” By pricing out less educated black laborers with a minimum wage, white unions were able to insulate themselves from competition.

Indeed, the Davis-Bacon Act, which demands that private employers pay “prevailing wages” for any government contracts, was explicitly passed as a Jim Crow law in order to protect white jobs from cheaper black competitors. And while the minimum wage is supported with much more pleasant rhetoric these days, the effects on black employment, particularly black teenage employment, have been devastating. As Thomas Sowell observes,

In 1948 … the unemployment rate among black 16-year-olds and 17-year-olds was 9.4 percent, slightly lower than that for white kids the same ages, which was 10.2 percent. Over the decades since then, we have gotten used to unemployment rates among black teenagers being over 30 percent, 40 percent or in some years even 50 percent.

It’s hard to imagine that black unemployment was actually less than that of whites. But that is the effect minimum wage laws can have.

Ending poverty and giving people additional income are praiseworthy goals, but there are no free lunches in this world. And trying to force prosperity through a minimum wage simply creates a whole host of negative and unintended consequences especially for those who are the most vulnerable.