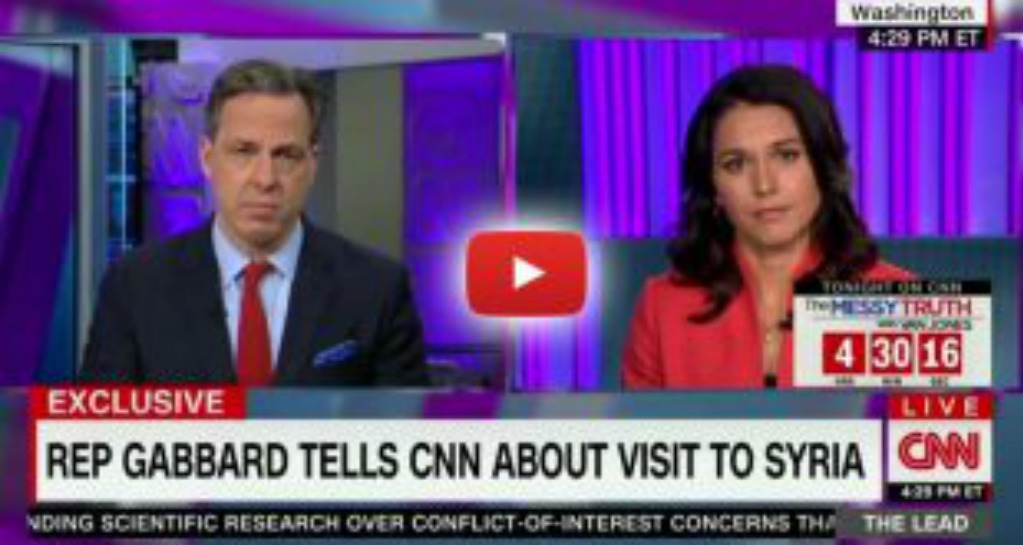 Washington, D.C. – Congresswoman Tulsi Gabbard made damning statements about the U.S. role in Syria in a CNN interview — noting that “there are no moderate rebels” — after a secret four-day fact-finding mission to Syria in which she met with everyday Syrians, and eventually met with President Bashar al-Assad.

“I wanted to see if there was in some small way, a way that I could express the love and the aloha and the care that the American people have for the people of Syria, and to see firsthand what was happening there, to see that situation there,” Gabbard told CNN’s Jake Tapper on Wednesday.

Her message to the American public was clear, and an extremely damning indictment of the steady stream of propaganda the Western media has fed the public regarding the existence of “moderate rebels” during the Assad regime-change operation:

“I’ll tell you what I heard from the Syrian people that I met with, Jake, walking down the street in Aleppo, in Damascus, hearing from them.

They expressed happiness and joy at seeing an American walking through their streets. But they also asked why the U.S. and its allies are providing support and arms to terrorist groups like al-Nusra, al-Qaida or al-Sham, ISIS who are on the ground there, raping, kidnapping, torturing and killing the Syrian people.

They asked me, why is the United States and its allies supporting these terrorist groups who are destroying Syria when it was al-Qaeda who attacked the United States on 9/11, not Syria. I didn’t have an answer for them,” Gabbard said, noting the clear dismay the average Syrian has for the U.S. support of al-Qaeda – a proposition which every American should equally question.

“The reality is… every place that I went, every person that I spoke to, I asked this question to them, and without hesitation, they said, there are no moderate rebels. Who are these moderate rebels that people keep speaking of?

Regardless of the name of these groups, the strongest fighting force on the ground in Syria is al Nusra, or al-Qaeda and ISIS. That is a fact,” Gabbard said.

“There is a number of different, other groups — all of them essentially are fighting alongside, with, or under the command of the strongest group on the ground that’s trying to overthrow Assad.

The Syrian people recognize and they know that if President Assad is overthrown, then al-Qaeda — or a group like al-Qaeda, that has been killing Christians, killing people simply because of their religion, or because they won’t support their terror activities, they will take charge of all of Syria.

This is the reality that the people of Syria are facing on the ground, and why they are pleading with us here in the United States to stop supporting these terrorist groups. Let the Syrian people themselves, determine their future, not the United States, not some foreign country.”

While Gabbard said she didn’t initially plan to meet with President Assad, she decided to do so as she felt he was an important player in negotiating a peace in Syria.

“When the opportunity arose to meet with him, I did so because I felt it’s important that if we profess to truly care about the Syrian people, about their suffering, then we’ve got to be able to meet with anyone that we need to if there is a possibility that we could achieve peace, and that’s exactly what we talked about.”

Tapper attempted to push the current anti-Assad/regime change talking points by claiming that Assad is to blame for the carnage in their country during the five-year civil war, while failing to acknowledge the U.S. role in assisting the rise of an Islamist principality in the Syrian theater – both through proxies, such as Saudi Arabia, and directly.

“Did you have any compunctions about meeting with somebody like that, giving him any sort of enhanced credibility because a member of the United States Congress would meet with someone like that?” Tapper asked.

One of the most important aspects of the interview is that it highlights that without being invited into Syria, by the legitimate and internationally recognized government, the U.S. is violating international law. Under the guise of fighting terror, the U.S. is illegally leveraging to topple a legitimate government without regard for what the Syrian people themselves want.

“The Syrian people will determine his outcome and what happens with their government and their future, but our focus, my focus, my commitment is on ending this war that has caused so much suffering to the Syrian people,” said Gabbard.

Earlier this month, in a speech on the floor of the House of Representatives, Gabbard criticized the U.S.’s “interventionist wars,” noting that our efforts are often counterproductive.

“Our limited resources should go toward rebuilding our communities here at home, not fueling more counterproductive regime change wars abroad.”

Gabbard railed against the U.S. government’s directly or indirectly supporting groups allied with terrorist groups such as ISIS and al Qaeda in the name of overthrowing the Assad government, and went so far as to introduce the “Stop Arming Terrorists Act,” which would prevent U.S. funding of these so-called “moderate rebels,” who are largely a propaganda fiction meant to coalesce public support behind another ill advised American regime change operation – as selling the arming of “freedom fighters/moderate rebels” sounds so much more appealing than arming Islamist rebels when selling it to the U.S. public.

“The fact that our resources are being used to strengthen the very terrorist groups we should be focused on defeating should alarm every American,” Gabbard said. “I urge my colleagues to support this bipartisan legislation and stop this madness.”

The fact that a sitting congresswoman has gone on record after visiting Syria to note that “there are no moderate rebels” should be a red herring to the American people that they are being sold a fabrication by the mainstream media in regards to the events that have transpired in Syria.

Please share this important story to help Rep. Tulsi Gabbard expose the Syrian regime change operation for exactly what it is! With a member of Congress now telling the truth to the American public, the lie can no longer be maintained by the war-mongers and their media cronies.