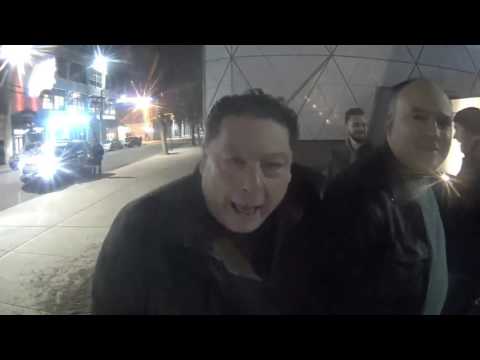 Video footage from Shia LeBeouf’s infamous “he will not divide us” live stream shows two old school New Yorkers laying the smack down on libtard logic.

What started as a pretentious “art project” to attract butt-hurt millennials so they could engage in a collective anti-Trump temper tantrum quickly descended into farce as LeBeouf”s installation was trolled over and over again, culminating in the actor’s arrest for assaulting one of his own supporters.

The video above shows two old school New Yorkers giving their unfiltered take on LeBeouf and the libtard logic that his project represents. The language is x-rated, but it’s funny as hell. Here are some choice cuts;

“I have a message for Chelsea Handler, you dirty drunken whore (she’s the TV host who said Melania Trump could “barely speak English”). “How dare you insult our First Lady? She doesn’t speak English? Huh? She speaks five languages, you drunken whore b*tch. I’m calling you out.”

“And Madonna you’re a whore, you think you were gonna suck d*ck for Clinton? You should be in jail for threatening to blow up the White House, you stupid b*tch.”

“And George Clooney, oh Mr. tolerant – when they said they were sending Syrian refugees to your place in Italy, to your neighborhood, you had a sh*t fit. Why not open your door and let them in, bro?”

“And too bad Shia you didn’t go to central booking last night to get your butt cheeks divided, you wanna talk about being divided?”

(“I wrote that joke”, his friend chimes in).

“And all you people who don’t know, George Soros is financing all these protests, he’s a traitor, he’s public enemy number one, that guy destroyed economies, he has caused most of the poverty in the world.”

You may not like the cussing, but the energy was a joy to behold.

For a full explanation of the twisted logic behind “he will not divide us,” watch the video below.