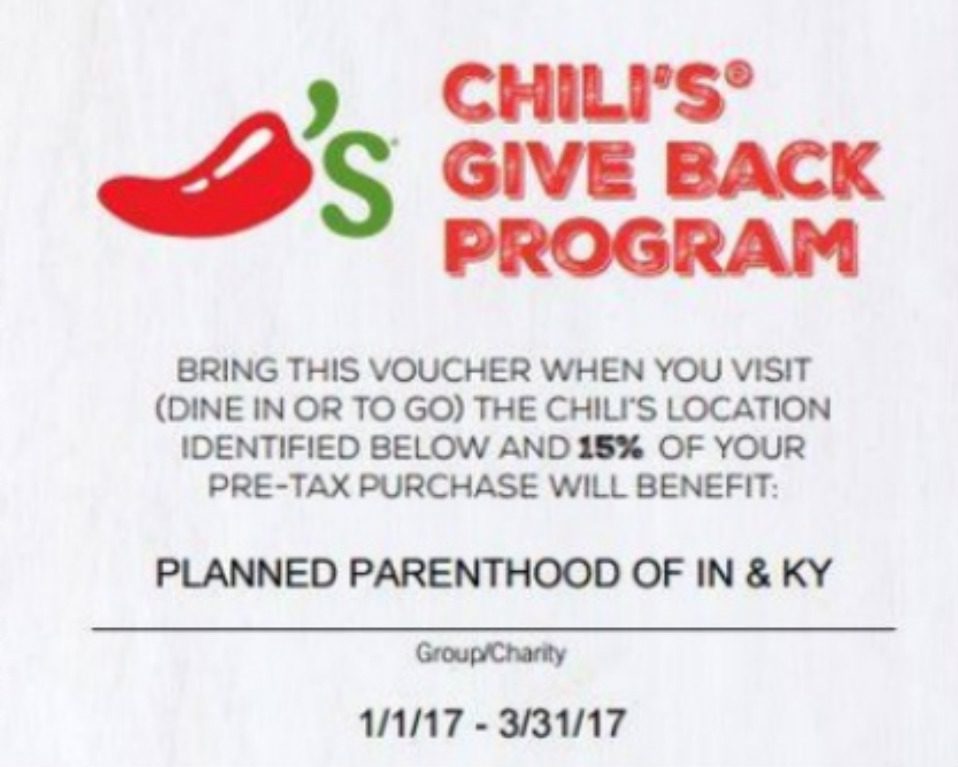 Earlier this week, Chili’s restaurants in Indiana and Kentucky partnered with Planned Parenthood to promote the killing of unborn human beings by encouraging diners to participate in vouchers donating 15% of their pre-tax meal purchases to the abortion mill.

The blowback from pro-lifers was swift.

LifeNews reports that after pro-lifers complained, Chili’s has canceled the Planned Parenthood fundraiser.

On Thursday, January 26, the corporate office of Chili’s Grill & Bar told LifeNews that the abortion fundraiser has been cancelled, and that the decision to engage in the Planned Parenthood fundraiser was made by a local franchise partner not by the national corporate office:

“At Chili’s, we have a longstanding history and take pride in giving back to unite our local communities together. We recognize every community is unique, and encourage our restaurant managers and franchise partners to support causes that help bring communities together and leave a positive impact on our valued Guests, neighbors, friends and families we serve.

Yesterday, we learned that an independent franchise partner of Chili’s in Indiana and Kentucky made the decision to host a Chili’s Give Back Event on behalf of Planned Parenthood Indiana and Kentucky. While our franchise partner had the best intentions; we have received growing feedback and concern from community members regarding the Give Back Event. This feedback does not reflect Chili’s focus on bringing communities together and the event was never intended to be viewed as a partisan event or political statement, therefore we, along with our franchise partner, have decided to cancel the event.

We will more clearly communicate the focus of Chili’s charitable giving efforts, so that our restaurant managers and franchise partners can feel empowered to support local organizations that bring communities together.”

LifeNews points out that this is not the first time that Chili’s has been involved in donation drives for Planned Parenthood.

A Chili’s restaurant in California had also set up a fundraiser for a local Planned Parenthood abortion clinic but eventually cancelled it after pro-life advocates complained. But pro-lifer Wynette Sills told LifeNews that although the fundraiser was canceled, a Chili’s restaurant at 3870 Truxel Rd, Sacramento, CA, nevertheless made a $200 donation to Planned Parenthood Mar Monte’s Sacramento chapter, as “compensation” for the last minute cancellation.