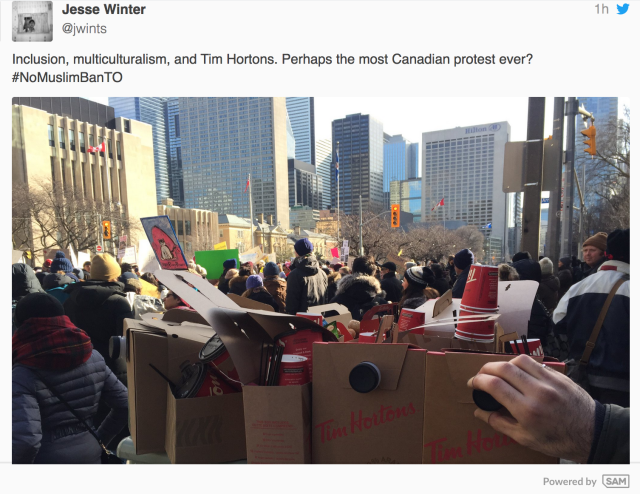 It’s not a “Muslim ban.” That would mean all Muslims were banned from entering the US. This is a counter-terrorist measure.

Why didn’t these clowns protest Obama’s ban on Iraqi refugees, or Carter’s ban on Iranians? They are beyond transparent. This best embodies the left: it’s their way or anarchy.

Demonstration follows a callout on social media over the weekend in response to the immigration policies of U.S. President Donald Trump.

Hundreds of people are gathered in downtown Toronto today for a demonstration in response to the immigration policies of U.S. President Donald Trump.

Protesters began lining the sidewalk outside the U.S. Consulate on University Avenue around 8 a.m., but quickly spread into the street.
They carried signs with slogans that read, “Do not scapegoat Muslim people,” “We will not go quietly,” and “Help refugees escape war.”

Nazerah Shaikh, her daughter and her three nieces carried signs saying, “The 6ix supports the Seven,” and including the flags of the seven predominantly Muslim countries against which Trump has levelled travel bans and restrictions.

“We do have close friends in Detroit who had to cancel travel plans because of these policies. Their citizenship is pending, and they have family here that they want to come and see, but they’re not sure they can.”

Organizer Dave Meslin said the protest had also become an impromptu vigil for the victims of the Quebec mosque shooting on Sunday night.

Many of the protesters sat in the southbound lanes of University Avenue, where they chanted, “No hate, no fear, refugees are welcome here” as police officers looked on. Others jumped and stamped their feet to keep warm in the frigid weather.

“Sympathies and condolences with our Muslim brothers and sisters in Quebec. We want to be a sanctuary city,” said Ahmad Gaied, an organizer with the Ontario Federation of Labour.