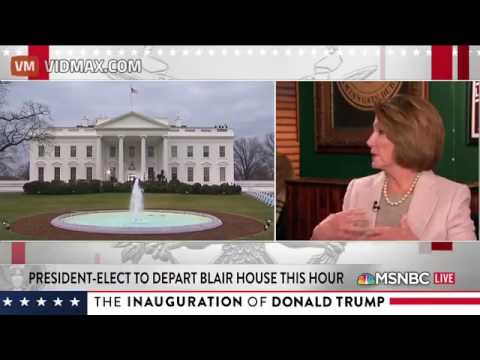 Nancy Pelosi (D-CA) must have some very screwed up ideas of the kind of work that God wants done on our planet.

Appearing on MSNBC’s Morning Joe the Senate Minority leader had the audacity to claim that Democrats were “doing the Lord’s work” and Republicans were “dishonoring” God. This is the same Nancy Pelosi whose own church leadership says she should be denied communion for her comments on abortion and whose religious leader has castigated on multiple occasions. She has not right or foundation to dictate to anyone what is and is not “God’s work.”

Nevertheless Pelosi said of Republicans, “They pray in church on Sunday and they prey on people the rest of the week. And while we’re doing the Lord’s work, ministering to the needs of God’s creation, they are ignoring those needs which is to dishonor the God who made them.” Pelosi later added of Democrats that “we don’t wear religion on our sleeve, but maybe we should.”

On their face, Pelosi’s comments are disgusting and untrue. Today’s Democrat Party has abandoned Christianity, and we know this from the times that they’ve voted God’s name off of their party platform and from the times they’ve BOOED God’s name at their National Convention.

Moreover, the Democrat Party now actively supports policies that stand in a diametric opposition to the revelation of God in Scripture. On sexuality, marriage, family, abortion and more, the Democrats oppose the Christian view of life and godliness on countless issues.

In particular, in regard to abortion, Nancy Pelosi and her comrades gleefully embrace the shedding of innocent blood and the sacrifice of our children for the comfort of their parents. This is something that God uses quite strong language to speak against in the Bible.

In Jeremiah 32:35 God calls the practice of child sacrifice an “abomination,” in Ezekiel 20:26 he promises to make anyone practicing such things “desolate,” in Ezekiel 20:31 he tells his people not to “defile” themselves by participating in such a practice… and in Leviticus 20:2-5 God explains that the punishment for killing your innocent child is… death.

6 “If a person turns to mediums and necromancers, whoring after them, I will set my face against that person and will cut him off from among his people.