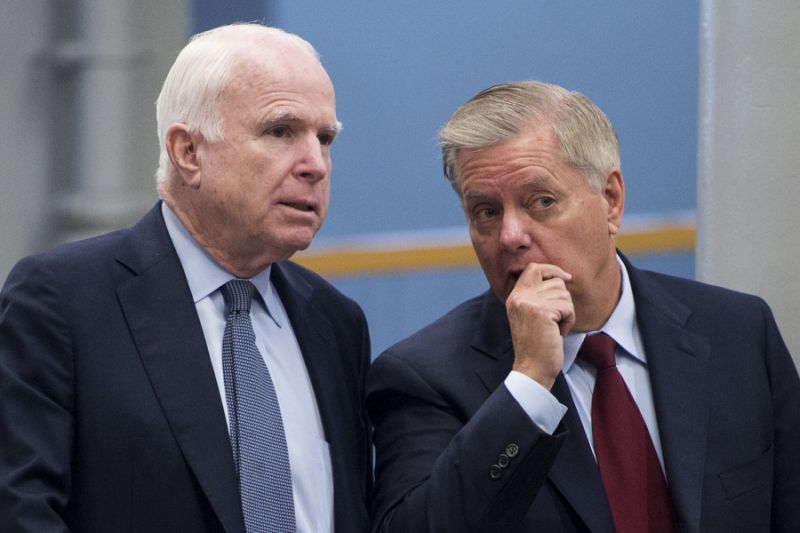 (INTELLIHUB) — After the neocon duo of Senators John McCain and Lindsey Graham publicly criticized his executive order on immigration from the Middle East, President Trump took to Twitter to destroy the noted warmongers.

Responding to a joint statement by the Senators, Trump noted that they were both failed presidential candidates before ridiculing them for their long history of being weak on immigration.

The joint statement of former presidential candidates John McCain & Lindsey Graham is wrong – they are sadly weak on immigration. The two…

Amazingly, Trump then went on to out the duo as high level warmongers who have been pushing for World War III for the vast majority of their political careers. Take note that this criticism is exactly what the alternative media has been saying for years.

…Senators should focus their energies on ISIS, illegal immigration and border security instead of always looking to start World War III.

As Trump said, McCain and Graham have long, undisputed records of warmongering and are both the very definition of the Rhino Republicans that Americans voted against in droves during the last election.

It is also blatantly obvious why McCain would come out against Trump’s executive order as he has been personally working against the Trump Administration since before the president-elect was even inaugurated.

In what led many to label him an actual traitor, McCain was the person who personally handed the disinformation dossier on Donald Trump to the FBI in what was a direct action against the incoming president designed to help leftist opposition.

“In the wake of the release of a disinformation dossier on President-elect Donald Trump, it has been revealed that none other than establishment Republican John McCain was responsible for passing the document to the highest reaches of the FBI,” I reported at the time.

“The fact that we now know Rhino Republicans like McCain are directly working in the background to stop the Donald Trump Administration before it even begins should make it clear once and for all that the establishment, at all levels, is firmly against the incoming president-elect.”

Make no mistake, there is currently a war brewing between establishment Republicans who want war and the more populist wing of the party who are sick of the continual nation building this country as engaged in overseas for decades.