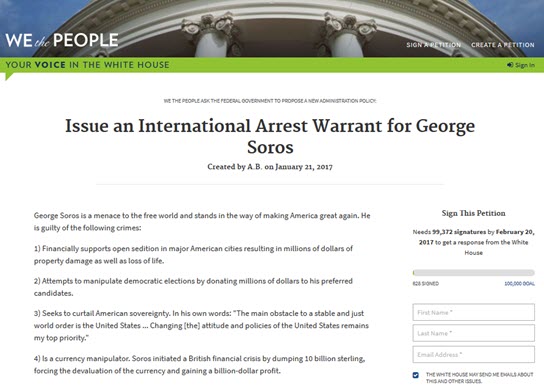 Although it hasn’t received very many signatures yet, someone decided to use Obama’s “We the People” White House petition website to put up a request under President Trump for an international arrest warrant to be issued for George Soros.

George Soros is a menace to the free world and stands in the way of making America great again. He is guilty of the following crimes:

1) Financially supports open sedition in major American cities resulting in millions of dollars of property damage as well as loss of life.

2) Attempts to manipulate democratic elections by donating millions of dollars to his preferred candidates.

3) Seeks to curtail American sovereignty. In his own words: “The main obstacle to a stable and just world order is the United States … Changing [the] attitude and policies of the United States remains my top priority.”

4) Is a currency manipulator. Soros initiated a British financial crisis by dumping 10 billion sterling, forcing the devaluation of the currency and gaining a billion-dollar profit.

While it’s unclear if the new Trump administration plans to actually respond to the Obama relic petition site, what is well-established is that George Soros funds civil unrest in countries around the globe including America to the tune of millions.

His foundation fronts have been outed for organizing massive protests and actually paying the protesters to show up to them (sometimes even busing people in from around the country!) with pre-printed signs in hand. From the Mike Brown shooting protests-turned-riots to the violent anti-Trump election protests to the purposeful evolution of Black Lives Matter in a police federalization agenda, Soros has been the not-so-hidden hand sowing a lot of the discord between the left and right in what appears to be a thinly veiled attempt to start a color revolution in the United States.

As Jay Syrmopoulos of The Free Thought Project put it:

Make no mistake that the events you’re seeing transpire nationwide are being orchestrated in part by a billionaire political elite class that is looking to subvert the will of the American people by attempting to foment a new American revolution. Soros’ formula has been duplicated in numerous nations, and it looks as if he now has the U.S. in his sights as the next target.