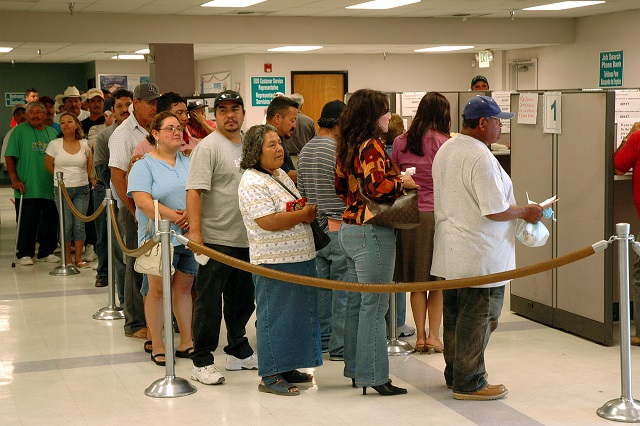 President Donald Trump’s greatest executive order to date may currently be in the pipeline.

The Trump administration is considering a plan to weed out would-be immigrants who are likely to require public assistance, as well as to deport — when possible — immigrants already living in the United States who depend on taxpayer help, according to a draft executive order obtained by The Washington Post. A second draft order under consideration calls for a substantial shake-up in the system through which the United States administers immigrant and nonimmigrant visas, with the aim of tightly controlling who enters the country and who can enter the workforce, and reducing the social services burden on U.S. taxpayers.

This is the greatest president of all time.

The drafts are circulating among administration officials, and it is unclear whether President Trump has decided to move forward with them or when he might sign them if he does decide to put them in place. The White House would not confirm or deny the authenticity of the orders, and White House officials did not respond to requests for comment about the drafts Monday and Tuesday.

If enacted, the executive orders would appear to significantly restrict all types of immigration and foreign travel to the United States, expanding bars on entry to the country that Trump ordered last week with his temporary ban on refugees and people from seven Muslim-majority countries.

While last week’s move focused on national security and preventing terrorism, the new draft orders would be focused on Trump’s campaign promises to protect American workers and to create jobs, immediately restricting the flow of immigrants and temporary laborers into the U.S. workforce. The administration has accused immigrants who end up receiving U.S. social services of eating up federal resources, and it has said that immigrant workers contribute to unemployment among workers who are U.S. citizens.

“Our country’s immigration laws are designed to protect American taxpayers and promote immigrant self-sufficiency. Yet households headed by aliens are much more likely than those headed by citizens to use Federal means-tested public benefits,” reads one draft order obtained by The Post, titled “Executive Order on Protecting Taxpayer Resources by Ensuring Our Immigration Laws Promote Accountability and Responsibility.”

The administration would be seeking to “deny admission to any alien who is likely to become a public charge” and to develop standards for “determining whether an alien is deportable … for having become a public charge within five years of entry” — receiving a certain amount of public assistance, including food stamps, Temporary Assistance for Needy Families (TANF) and Medicaid.

This is a perfectly reasonable policy which plenty of other nations have. Nonetheless, here it would be revolutionary and result in mass deportations and a new and restored America. While leftists will cry like never before, the fact is it has to be done if America is to remain solvent and survive.

The second order, titled “Executive Order on Protecting American Jobs and Workers by Strengthening the Integrity of Foreign Worker Visa Programs” calls for “eliminating” the “jobs magnet” that is driving illegal immigration to the United States, according to a copy obtained by The Post. The order would rescind any work visa provisions for foreign nationals found not to be in “the national interest” or found to be in violation of U.S. immigration laws.

The order weighs how to make the country’s immigration program “more merit based,” calls for site visits at companies that employ foreign workers, and tasks the Department of Homeland Security with producing a report twice a year on the total number of foreign-born people — not just nonimmigrant visa holders — who are authorized to work in the United States.

It also instructs DHS and the State Department to submit a report on “the steps they are taking to combat the birth tourism phenomenon,” meaning instances in which noncitizens come to the U.S. to have children who in turn gain citizenship, a popular conservative refrain but one that is dismissed by immigration experts as a relatively minor problem.

The destruction and annexing of California by Mexico is a “minor problem.”

Together, the orders would aim to give U.S. citizens priority in the job market by preventing immigrants from taking jobs and by pushing some immigrants out of jobs.

“The unlawful employment of aliens has had a devastating impact on the wages and jobs of American workers, especially low-skilled, teenage, and African American and Hispanic workers,” the draft order says.

Immigration advocates reacted with outrage to the draft documents, warning that if enacted the executive orders could harm the U.S. citizen children of undocumented immigrants whose parents could be stripped of public assistance.

The Post goes on to whine about how terrifying it is to think immigrants who come here only to collect welfare could be kicked out. It would actually be one of the single greatest acts ever to happen in this nation’s history. The enemies of America must be shaking in their boots.