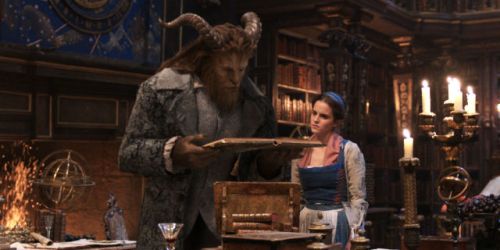 Beauty and the Beast is a traditional fairy tale written by French novelist Gabrielle-Suzanne Barbot de Villeneuve and published in 1740.

The story is so well known, there’s hardly the need for me to relate it. But if you don’t know, here’s a synopsis:

A wealthy widowed merchant has several children, the youngest and his favorite is Beauty (or Belle, in French), who is lovely, loves books, and pure of heart.

One day, the merchant got lost in a forest during a storm. Seeking shelter, he entered a palace with a table laden with food and drinks, but empty of people. Knowing that Beauty loves roses, the merchant plucked a rose from the palace’s garden to bring home to his daughter. A hideous beast appears and tells the merchant he must die for stealing the rose after availing himself of the beast’s generous hospitality. The merchant begs for his life and tells Beast that he had only picked the rose as a gift for his youngest daughter. The Beast agrees to let the man go, but only if the merchant or one of his daughters returns.

Upon the merchant’s return home, Beauty valiantly goes to the palace, where Beast lavishes finery on her and her every need met by invisible servants. Every night, Beast asks Beauty to marry him, but Beauty declines.

After months, Beast allows homesick Beauty to visit her family, on the condition that she’ll return after a week. Beauty agrees, but reneges on her promise.

One day, Beauty sees in the magic mirror Beast had given her that Beast is very ill. She quickly returns to the palace, to find Beast dying. Beauty weeps over Beast, saying that she loves him. Beast is transformed into the handsome prince in Beauty’s dreams. The Prince tells her that a vindictive fairy had transformed him into a hideous beast, and that the curse would be broken only when he, despite his beastly ugliness, finds true love. He and Beauty are married and they live happily ever after.

This morning, while surfing the web, I came across the trailer of Disney’s new live-action Beauty and the Beast, coming to movie theaters on March 17.

The trailer begins with an old man (Beauty’s father) running in the woods, being chased by something. The man trips and falls.

At the 0:27 mark, whoever or whatever was chasing him stands over the man, casting its shadow.

My skin crawled, and alarm bells started ringing in my head . . . .

The shadow of the Beast has HORNS.

Since when is the Beast of “Beauty and the Beast” a goat-man with horns?

Here are previous versions of Beast, none of which is a goat-man with horns:

In the 19th century, Eliphas Levi drew the Baphomet as a Sabbatic Goat, a humanoid with a goat’s face, horns, and legs. Today, the Baphomet is widely used as a symbol of Satan, as in this statue (below) erected by the Satanic Temple last year somewhere in Detroit, Michigan. (See “Detroit goes to the devil“)

Below are Levi’s Baphomet and Disney’s 2017 Beast:

The message of Disney’s new Beauty and the Beast movie is this:

The Devil is just misunderstood! The Devil loves you and wants to give you riches and finery! All you gotta do is tell him you love him, and he’ll turn into a handsome prince, and you’ll live happily ever after.