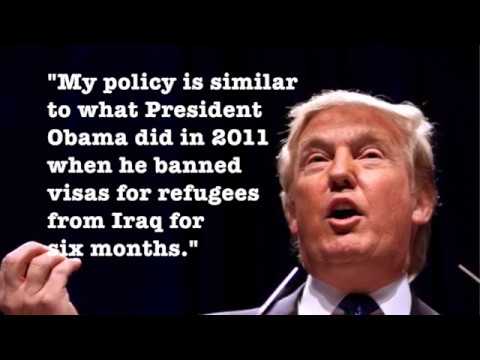 This week, I have had the opportunity to travel to Ohio and speak with many adults and youth about the recent controversial executive order by President Donald Trump. Trump’s order institutes a 120-day freeze on the U.S. refugee resettlement program and a 90-day halt on entry into the U.S. from seven predominantly Muslim nations: Iran, Iraq, Somalia, Syria, Sudan, Yemen, and Libya. This also includes an indefinite ban placed on would-be visa applicants from Syria.

You may find yourself a bit confused about all the upheaval at the airports in America if you heard President Trump in a recent statement claiming, “My policy is similar to what President Obama did in 2011 when he banned visas for refugees from Iraq for six months.”

Many might not realize it, but the seven countries banned from entry into the U.S. were actually selected by the Obama White House.

All the uproar surrounding the fairness or unfairness of this executive order really serves to mask the crucial question, is it Constitutional?

In this recent example of an executive order, we first must identify if either President Obama or Trump were acting within the parameters of their constitutional authority. The short answer is “yes,” and here is why:

Article Four, Section 4, gives the federal government the authority to protect our country against invasion.

In 1952 Congress passed the Immigration and Nationality Act (INA), 8 U.S.C. 1101 et seq., and section 301 of title 3, United States Code, to protect the American people from terrorist attacks by foreign nationals admitted to the United States. This allows the president the ability to “suspend the entry” of “any class of aliens” that he finds are “detrimental to the interest of the United States.”

The President is required in Article 2 of the Constitution to execute all laws of United States. This is the extent of Executive Orders, seeing to it that the laws made by Congress are faithfully executed.

So both Obama and Trump acted “Constitutionally” when they banned refugees from areas that pose a potential threat to American life.

My advice to the crusaders of social justice for refugees would be to join a non-profit or missions organization; and rather than protest at the airport, buy a plane ticket and head over to those countries where they can offer tangible help to those for whom they are protesting. The good news for them is that there are thousands of Christian organizations that are already in those countries and would appreciate their help.

It is exceptionally important that we do not confuse the two different roles of Charities and Government. Charities give with love; Government protects with the sword. Don’t make the fatal mistake of using government’s sword to administer your version of “charity,” because tomorrow the sword may force you to support another’s version of “charity.”

Learn more about your Constitution with Jake MacAulay and the Institute on the Constitution and receive your free gift.