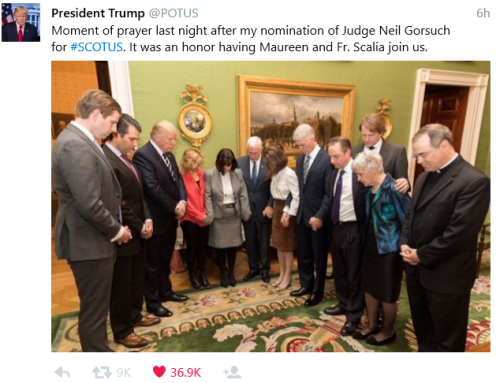 On January 31, 2017, President Donald John Trump fulfilled another campaign promise when he announced his nomination of federal appeals court judge Neil Gorsuch to the Supreme Court.

Trump had said he would nominate someone like the late Justice Antonin Scalia. Indeed, Judge Gorsuch, 49, is pro-life like Scalia, and has taken the pro-life side in important cases as well as written a book excoriating assisted suicide. Like Scalia, Gorsuch is a strong originalist, believing that the Constitution should only be interpreted as the Founding Fathers intended.

Justice Gorsuch is currently a judge of the United States Court of Appeals for the Tenth Circuit, which includes the districts of Colorado, Kansas, New Mexico, Utah and Wyoming, as well as the Eastern, Northern and Western districts of Oklahoma. He has served as a federal judge since August 2006 and was appointed by President George W. Bush and confirmed unanimously by the Senate. (LifeNews.com)

After announcing Judge Gorsuch as his SCOTUS nominee, this is what President Trump did:

Note the presence of Justice Scalia’s wife (Maureen) and son (Fr. Paul Scalia of the Diocese of Arlington, VA) among those who prayed. President Trump has the graciousness and thoughtfulness to invite them to the nomination announcement to show his respect for Justice Scalia.

During the brutal GOP primary campaigns last year, there were expressions of doubt about Donald Trump’s Christian faith.

I, for one, no longer doubt him.

Please continue to pray for President Trump — that he is protected from all evil and harm, and that he continues boldly, fearlessly, and effectively to lead America on the path of right.