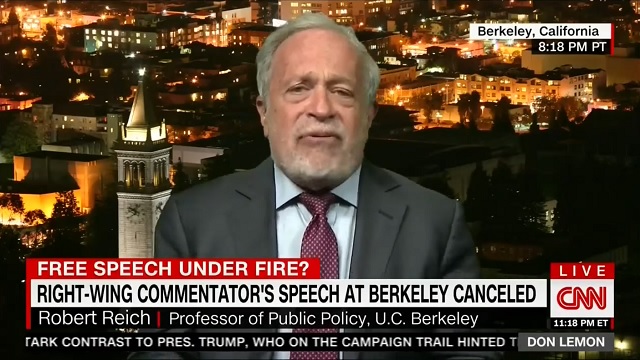 According to Berkeley professor Robert Reich, Bill Clinton’s former Labor Secretary, the rioters at Berkeley may have been Breitbart secret agents.

“I was there for part of last night, and I know what I saw and those people were not Berkeley students,” Reich told CNN’s Don Lemon [Thursday]. “Those people were outside agitators. I have never seen them before,” he added.

“There’s rumors that they actually were right-wingers. They were a part of a kind of group that was organized and ready to create the kind of tumult and danger you saw that forced the police to cancel the event,” Reich ludicrously asserted. “So Donald Trump, when he says Berkeley doesn’t respect free speech rights, that’s a complete distortion of the truth.”

“You think it’s a strategy by [Milo Yiannopoulos] or right-wingers?” asked Lemon.

“I wouldn’t bet against it,” Reich responded. “I saw these people. They all looked very– almost paramilitary. They were not from the campus. I don’t want to say factually, but I’ve heard there was some relationship here between these people and the right-wing movement that is affiliated with Breitbart News.”

This idiot should not be allowed to teach anyone.

It seems Reich’s source for these claims may have been loony George Takei and Ana Kasparian: These people are losing their minds.

You’d think he’d be celebrating this as a victory for “shutting down Nazis” as the actual leftists behind the riot are doing. I guess he realizes the whole scene looked terrible and backfired miserably because the controlled media can no longer cover up these terrorist’s violent crimes.