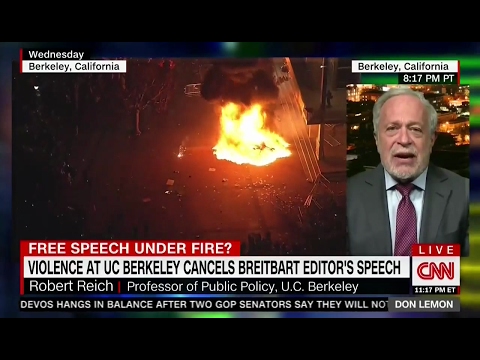 In barely believable comments, UC Berkeley professor and former Democratic Secretary of Labor Robert Reich claimed on CNN that the rioters at Berkeley who violently attacked Trump supporters were actually “right-wingers” who were part of a conspiracy to make liberals look bad.

“I was there for part of last night, and I know what I saw and those people were not Berkeley students,” Reich told CNN’s Don Lemon. “Those people were outside agitators. I have never seen them before,” he added.

“There’s rumors that they actually were right-wingers. They were a part of a kind of group that was organized and ready to create the kind of tumult and danger you saw that forced the police to cancel the event,” Reich ludicrously asserted. “So Donald Trump, when he says Berkeley doesn’t respect free speech rights, that’s a complete distortion of the truth.”

“You think it’s a strategy by [Milo Yiannopoulos] or right-wingers?” asked Lemon.

“I wouldn’t bet against it,” Reich responded. “I saw these people. They all looked very– almost paramilitary. They were not from the campus. I don’t want to say factually, but I’ve heard there was some relationship here between these people and the right-wing movement that is affiliated with Breitbart News.”

We’ve seen the leftist media refuse to condemn and in some cases even celebrate the vicious assaults on people for exercising their right to free speech that took place on Wednesday night, but for someone to claim that the entire sequence of events was a vast right-wing conspiracy is even more bizarre.

Reich’s absurd comments shouldn’t even be dignified with a rebuttal, suffice to say that the same black-clad Antifa leftists have been rioting their way through cities up and down the country for weeks, including at Donald Trump’s inauguration in Washington DC. Was that all a secret right-wing plot too?

Milo’s speeches have also been shut down and interrupted by leftists in numerous different cities for the best part of a year. Were all those incidents cooked up by Milo’s fans too?

These remarks illustrate once again how the left is willing to completely disconnect itself from reality when they are soundly trounced on a narrative.

The Democratic establishment and the mainstream media have been legitimizing violent riots and physical attacks on Trump supporters for the best part of 18 months. And then when it actually happens, some of them retreat into the twilight zone so that they don’t have to face the blame.