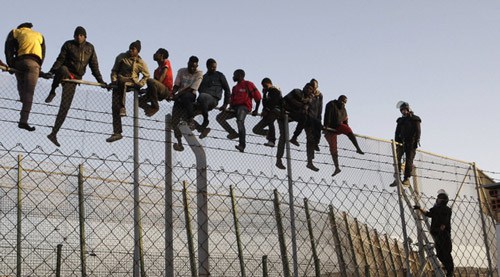 Now, this will do more to eliminating illegal immigration than anything else, including a wall that costs American taxpayers billions of dollars and increases the size of the central government in border patrol agents. A leaked draft of an executive order by President Donald Trump indicates that he is looking to eliminate the welfare state for illegals, which is nothing more than dangling a carrot in front of them to cross the southern border on the American taxpayers’ dime.

The Trump administration is considering a plan to weed out would-be immigrants who are likely to require public assistance, as well as to deport — when possible — immigrants already living in the United States who depend on taxpayer help, according to a draft executive order obtained by The Washington Post.

A second draft order under consideration calls for a substantial shake-up in the system through which the United States administers immigrant and nonimmigrant visas, with the aim of tightly controlling who enters the country and who can enter the workforce, and reducing the social services burden on U.S. taxpayers.

The drafts are circulating among administration officials, and it is unclear whether President Trump has decided to move forward with them or when he might sign them if he does decide to put them in place. The White House would not confirm or deny the authenticity of the orders, and White House officials did not respond to requests for comment about the drafts Monday and Tuesday.

One of the drafts titled “Executive Order on Protecting Taxpayer Resources by Ensuring Our Immigration Laws Promote Accountability and Responsibility” reads, “Our country’s immigration laws are designed to protect American taxpayers and promote immigrant self-sufficiency. Yet households headed by aliens are much more likely than those headed by citizens to use Federal ­means-tested public benefits.”

While the Post claims that the EO “provides no evidence to support the claim that immigrant households are more likely to use welfare benefits,” the reality is that has already been covered previously as the Obama administration worked with Mexico to advertise and provide such benefits to illegals in the States.

Another EO titled “Executive Order on Protecting American Jobs and Workers by Strengthening the Integrity of Foreign Worker Visa Programs” calls for “eliminating” the “jobs magnet” that the administration claims is driving illegal immigration to the United States. That is welfare.

“The unlawful employment of aliens has had a devastating impact on the wages and jobs of American workers, especially low-skilled, teenage, and African American and Hispanic workers,” the draft order reads.

Angela Maria Kelley, an immigration expert at the Center for American Progress, a liberal think tank said, “He’s loaded his anti-immigrant Uzi and is firing off another round. This time he’s aiming at U.S. citizen kids who have an undocumented parent, and depending how broad the reach of his order, he could deport kids who have received reduced lunches in school. It’s stunning the depth of disruption and chaos he seems hellbent on inflicting on our communities.”

However, Zero Hedge reminds us of the past.

Seemingly following the proposals of Bill Clinton (and Ron Paul), The Washington Post reports that a leaked document shows the Trump administration is planning to crackdown on current, and would-be, immigrants who are likely to require public assistance.

That is why we are doubling the number of border guards, deporting more illegal immigrants than ever before, cracking down on illegal hiring, barring benefits to illegal aliens, and we will do more to speed the deportation of illegal immigrants arrest for crimes…

It is wrong and ultimately self-defeating for a nation of immigrants to permit the kind of abuse of our immigration laws that has occurred in the last few years.. and we must do more to stop it.”

The various taxpayer-funded programs that benefit illegal immigrants in the United States, such as direct financial transfers, medical benefits, food assistance, and education, cost an estimated $100 billion dollars per year. That is a significant burden on citizens and legal residents. The promise of free money, free food, free education, and free medical care if you cross the border illegally is a powerful incentive for people to do so. It especially makes no sense for the United States government to provide these services to those who are not in the US legally.

These are unsubstantiated drafts from the Post. They have been known to provide fake news in the past. The White House has neither confirmed nor denied the drafts as authentic. Time will tell, but this certainly sounds like the Donald Trump we heard on the campaign trail and the removal of illegals from the welfare system is a step in the right direction. If we could only start thinking the same way about the entire welfare system, we’d be in good shape.