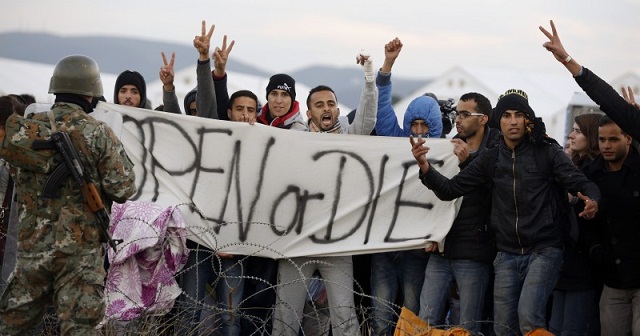 Even though the majority of Americans as well as the entire Trump administration do not want so-called “refugees” brought into America, they’re being forced down our throat by the deep state.

This is straight treason.

The US State Department is set to resume admitting refugees, including asylum-seekers from Syria, on Monday, after a federal judge blocked the Trump administration’s controversial ban on refugee admissions from 7 majority-Muslim countries.

An email from the State Department’s refugee office, seen by Reuters, said the US government is working with its legal team and foreign partners to comply with the ruling.

A US State Department official told Reuters that officials “expect some refugees to arrive Monday,” adding that they do not usually enter on weekends.

Washington instructed the International Organization for Migration “to rebook refugees of all nationalities, including Syrians,” scheduled to arrive after Trump’s order was signed, the email said.

“We are focusing on booking refugee travel through February 17. We are asking that arrivals resume this Monday, the first normal travel day of the week, if possible. We are aware that some refugees may not be ready to depart on short notice,” the email said, as cited by Reuters.

A United Nations spokesman, Leonard Doyle, told the New York Times that around 2,000 refugees are ready to travel.

The State Department said on Saturday that those with valid visas could enter the country, adding that the staff would “resume inspection of travelers in accordance with standard policy and procedure” which existed before Trump’s restrictive executive order.

What type of system of government completely ignores the will of the public in favor of non-citizen foreigners, many of whom we’re at war with and wish to do us harm?

This is completely insane.

“Checks and balances” were meant to protect the rights of citizens against a tyrannical government, now they’re being used to undermine the will of the public in favor of Muslims from Iran, Iraq, Libya, Somalia, Sudan, Syria and Yemen.

Some lunatic Black Lives Matter activist in a robe said we have to, therefore it is so.

Trump needs to shut this scam down by any means possible. It’s time to use the power the state accumulated to undermine the will of the public to instead enforce it.