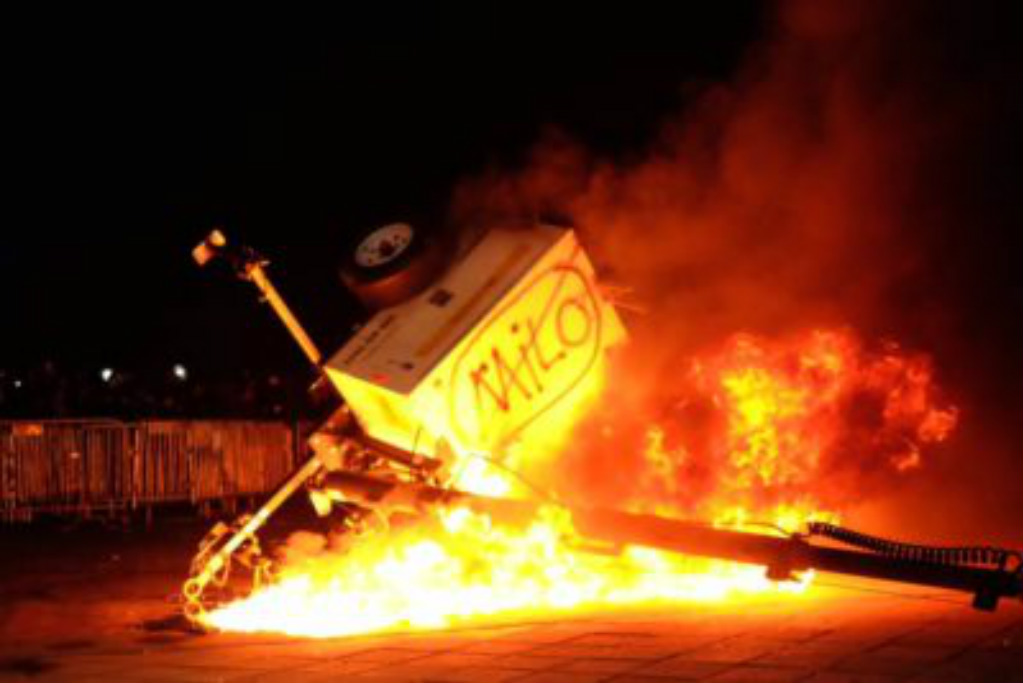 This is sedition. Violent sedition. Foreign monies from hostile actors like George Soros funding the violent overthrow of the US government should be banned, prohibited. Soros should be banned from entering the country.

How is this not a declaration of war from a foreign power? Soros has more money at his disposal than some nations. He should be treated the same as any other that exercises warfare against us.

TGR reader Kevin suggest the same laws that allow confiscation of goods due to drug abuse be applied to George Soros.

Anyone actively engaged in the overthrow of the President and the US government should be jailed for sedition and treason. Violent goons burning, beating and blowing up buildings in order to oppress and suppress our unalienable rights guaranteed by the Constitution should be jailed. At Gitmo.

Basta. The left is enemy — it’s time to act.

The Alliance for Global Justice, which is funded by the George Soros-backed Tides Foundation, reportedly donated $50,000 to fund Refuse Fascism, which openly brags about using violence to shut down conservative and libertarian speech.

“While it is unclear whether those who carried out the violence were paid to do so, the benefactors of the Alliance for Global Justice — and Refuse Fascism — are listed online,” reported the Daily Caller. “According to its most recent 990 tax form, Alliance for Global Justice (AfGJ) received $2.2 million in funding for the fiscal year ending in March 2016. One of the group’s biggest donors is the Tides Foundation, a non-profit funded by billionaire progressive philanthropist George Soros. Tides gave AfGJ $50,000.”

“Other notable donors include the city of Tucson and the United Steel Workers labor union. The former gave $10,000 to AfGJ while the latter contributed $5,000,” they continued. “Charities associated with several major corporations also donated. Patagonia.org, the outdoor apparel and equipment company, gave $40,000. The Ben & Jerry Foundation, the charity associated with the ice cream maker, gave $20,000. And Lush Cosmetic gave $43,950. Another bit of irony is seen in the $5,000 contribution from the Peace Development Fund, a group that claims to support organizations that fight for human rights and social justice.”

The group defended the violent riot at Berkeley on Facebook, which left numerous Trump supporters and fans of MILO injured and bloody, before deleting their post.

“Dismantling police fences is not violent,” they claimed, according to the Daily Caller, ignoring the rest of the violence that occured. “And to compare preventing someone like that from speaking to the real-world violence that they perpetuate everyday is ludicrous.”

Refuse Fascism also branded the riot as “righteous,” and encouraged more violence to shut down conservatives in a post on their website.

“Last night, thousands of students, professors and others protested the appearance and organizing rally of Milo Yiannopoulos, a major fascist operative, shutting it down. This was righteous and much more like this is needed,” the group proclaimed. “Lets be clear: Milo Yiannopoulos is not engaging in ‘free speech.’ He is consciously spearheading the Nazification of the American University.”

The riot started at UC Berkeley on Wednesday after protesters against Breitbart Senior Editor MILO became increasingly violent outside of his show.

Despite the large amount of violence, numerous reports indicate that police officers refused to intervene, and only one suspect was arrested.

UFC veteran and professional MMA fighter Jake Shields was even forced to rescue a man who was being assaulted by left-wing rioters after police allegedly refused to intervene.

“Like fifteen people were trying to attack him and others were cheering them on,” explained Shields, who managed to successfully rescue the man, in an interview with Breitbart News. “No one helped, no one had the balls to step in, so my reaction was to run in and start picking people off.”

“More chaos started happening, so I went up to the police and tried bringing them back, but they were just like ‘we’re not really going over there. You should just stay away.’” he continued. “I don’t know if they were taking orders from someone or if they were just being lazy. I don’t know what the situation was, but it was pathetic to watch. Our police, who are supposed to defend the citizens of Berkeley. It’s a sad scene that they would allow that.”

The national co-coordinator for the Alliance for Global Justice, Chuck Kaufman, claimed he wasn’t aware that Refuse Fascism were involved in the riots, but defended their involvement citing the fact that numerous far-left groups joined in.

“I wasn’t aware that Refuse Fascism was involved, but probably they were one of a whole lot of groups calling to shut down Milo Yiannopoulos’ hate speech,” said Kaufman to The Daily Caller. “AfGJ acts as fiscal sponsor for Refuse Fascism which means we process tax-deductible donations for them. As long as their use of the money falls into areas permitted for tax-exempt 501(c)(3) organizations, we don’t involve ourselves one way or the other in their program work.”

Several celebrities and news outlets expressed support for the riot, including Hollywood director Judd Apatow, who deleted his tweet shortly after, and Fusion, who smeared MILO as a “Nazi,” before praising rioters.

The day after, MILO’s tour bus was tracked down by “anti-fascists” and vandalized, forcing both him and his team to evacuate the premises after his location was leaked online.

Four anti-fascists were also arrested last week after they became violent during a protest against libertarian commentator and VICE co-founder Gavin McInnes, who was speaking at New York University.