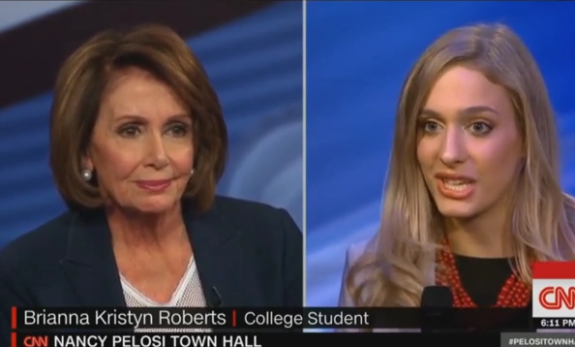 Editor’s Note: For those of you who regularly read here, you know I am staunchly pro-life, not like today’s “pro-life” movement is. I don’t believe abortion (murder of the unborn and born) should be allowed for any reason and that both mother and baby’s lives should be sought to save if one or both are in danger. I also believe in capital punishment for those that engage in the practice or murdering the unborn. Therefore, understand that when Nancy Pelosi tells this adopted woman that she wants others to have the choice, what she is actually say is that she thinks that this woman’s mother and all women should have the right to murder their unborn babies if they want to. It’s not hyperbole. She is just masking the truth with the word “abortion.”

California has often been referred to as the land of nuts, fruits and flakes. You can read that any way you want, but in reference to that statement, it’s only fitting that one of the flakiest nuts from California is former Speaker of the House and current House Minority Leader Nancy Pelosi.

Over the years, Pelosi has made a number of stupid, ridiculous and insulting statements, but her latest gaff is probably her worst and hopefully brings a quick end to her career in Washington DC.

In 2009, Pelosi revealed her partisan stupidity when referring to the Affordable Care Act, and she told the nation:

“We have to pass the bill so that you can find out what is in it.”

In other words, she was admitting that she had no idea what the Affordable Care Act said or did but wanted to just blindly pass it because it was what Barack Obama wanted. Why would any politician ever admit to wanting to pass a piece of legislation without first knowing what it said?

That wasn’t her only absurd comment about the Affordable Care Act, aka Obamacare. She also stated:

“The Affordable Care Act is bringing the cost of healthcare in our country down in both the public and private sector and that is what is largely responsible for the deficit coming down.”

Remember when Pelosi told everyone:

“And everybody will have lower rates, better quality care and better access.”

There are countless reports of people receiving worse care and reduced access to what medical care there is. Our daughter is a prime example. Although she had a tumor that was secreting excess hormones which were causing a myriad of health issues, most doctors said they couldn’t do anything with the tumor because it was too small under Obamacare guideline. In order for the insurance to pay and the doctors to get paid, the new guidelines said her type of tumor had to be at least 10mm in size and since her’s was only 9mm, they wouldn’t touch it. Thank you Pelosi for that better quality care you promised.

“I don’t remember saying that everybody in the country would have a lower premium.”

All she had to do was check out her list of quotes and she would easily have found it. If she truly didn’t remember saying it, then it demonstrates that she’s definitely not qualified to be in the US House of Representatives.

This is another one of Pelosi’s whoppers, when speaking about Barack Obama, she stated:

“I don’t think he’s ever done anything for political reasons.”

Obama never doing anything for political reasons is like saying the Pope never says prayers for religious reasons.

“I am part of the pro-life generation, I believe that abortion is not the answer for unplanned pregnancy.”

“My birth mother was faced with a decision that many women today are facing. Without the means of properly raising a child, she chose the most ethical decision and chose adoption. With her courageous and unselfish decision, I now have the ability to thrive and succeed in life.

“Don’t you think everyone needs the ability to thrive and succeed in life?”

To which Pelosi replied:

In other words, NO, Pelosi does not believe that everyone needs the ability to thrive and succeed. Instead, Pelosi basically told the adopted college student that her mother had the choice to abort her, deny her the right to life, liberty and the pursuit of happiness. To some people, Pelosi’s response could have been interpreted that the girl’s mother should have aborted her. How uncaring, insensitive and cold-hearted can she be to respond in that way.

It only proves that Nancy Pelosi, like her heroes (Obama and Clinton) care more about their murderous agenda than they do about people’s lives.