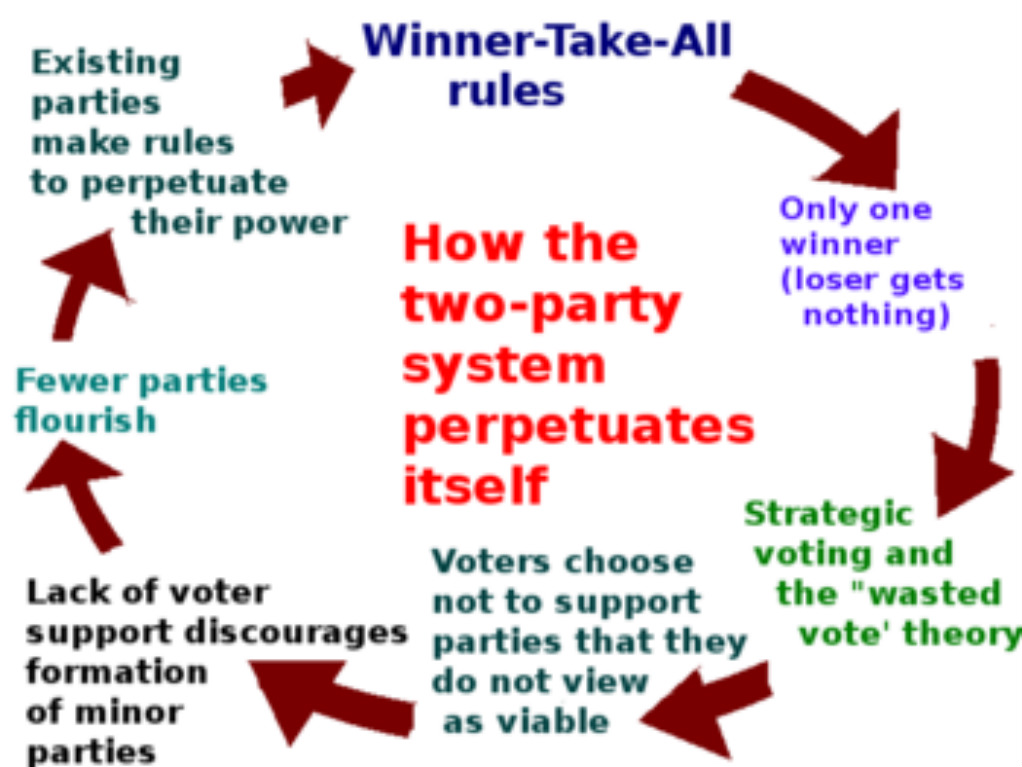 Last week, a federal judge provided a long overdue victory for alternative political parties in the United States. The ruling found the Federal Election Commission (FEC), the institution that oversees the Commission on Presidential Debates, failed to sufficiently examine evidence challenging two-party dominance in national debates. The judge asserted there was no evidence “that the FEC considered the relevant factors or took a hard look at the evidence.”

The ruling, issued in the United States District Court for the District of Columbia, focused on a 2014 complaint regarding the 2012 election filed by the non-profit organization Level the Playing Field. It also focused on objections from the Green Party and Libertarian Party (which were dismissed by a federal judge last year). According to Buzzfeed News, one of the few mainstream outlets to cover the ruling, there were two main elements:

“The first part involves the FEC’s dismissal of two administrative complaints claiming the debate commission and its directors violated election laws by engaging in partisan activity in support of the Democratic and Republican parties. The Green Party, Libertarian Party, and other challengers presented evidence that commission directors contributed to candidates and made statements supporting particular parties.”

The second part focused on Level the Playing Field’s request “that the FEC revise its rules to block the the commission from using a polling threshold to decide participation in presidential and vice-presidential debates.” The commission requires that a candidate receive 15% support or higher in five national polls in order to be invited to the debates. Level the Playing Field’s request was denied, and in response, the group compiled analysis from experts, who highlighted “the hundreds of millions of dollars a candidate would have to spend to meet the 15 percent polling target, and argued that the rule was not an objective criteria.”

They claimed “it was specifically designed to keep out candidates not affiliated with the Republican or Democratic parties,” Buzzfeed explained.

The Commission on Presidential Debates, a faction of the Federal Election Commission, has been criticized for these biases before. The commission’s board of directors has overt partisan leanings. As the International Business Times has noted:

“The Commission On Presidential Debates board is currently chaired by Frank J. Fahrenkopf Jr. and Michael D. McCurry. Fahrenkopf is a former chairman for the Republican National Committee and McCurry was press secretary under President Bill Clinton.”

As journalist Ben Swann astutely explained during the 2012 election:

“So let’s be clear: a debate commission that’s run by former bigwigs from the Republican and Democrat parties and creates a 15% polling rule in five national polls isn’t trying to create inclusion — they’re trying to prevent it. If you don’t have the money of the two big parties, getting your name out nationally to get into those polls, well, it can only happen if you’re a billionaire like Ross Perot. Aside from billionaires, no one else has a chance.”

Level the Playing Field’s suit further alleged that members of the board had conflicts of interest because of their political contributions. Judge Tanya Chutkan further documented the commission’s biases in her summary opinion:

She also acknowledged the commission’s inherent commitment to the two-party system:

“The CPD is ‘bipartisan’ by its own description: the press release announcing its formation stated that it was a ‘bipartisan . . . organization formed to implement joint sponsorship of general election presidential and vice-presidential debates . . . by the national Republican and Democratic committees between their respective nominees.’”

Ultimately, she ruled that the FEC “failed to show that it properly considered all of the evidence and arguments presented by the challengers” when it was supposed to review its rules in 2014. She called that rejection “arbitrary, capricious, and contrary to law,” asserting that “the evidence unaddressed – or outright ignored – by the FEC is quite substantial.” She also pointed out the FEC’s “refusal to engage in thoughtful, reasoned decision-making in either enforcement or rulemaking in this case.”

Chutkan ordered the commission to review its previous decision and gave them 30 days to do so. According to Peter Ackerman, Level the Playing Field’s founder, the decision “lays the groundwork for removing the primary obstacle to providing Americans with the independent alternative to the two parties that polls clearly indicate they want.“

Alexandra Shapiro, a lawyer for the plaintiffs, praised the decision, pointing out that it “marked the first time the FEC and CPD have been successfully challenged over debate rules. This is an enormously important ruling.”

In an age where Americans are increasingly dissatisfied with the options the political establishment provides them, this small but vital ruling could signal a turning point when it comes to promoting exposure for presidential candidates who are not members of the country’s two-party duopoly.

Unsurprisingly, according to Buzzfeed, the FEC declined to comment on Judge Chutkan’s ruling.