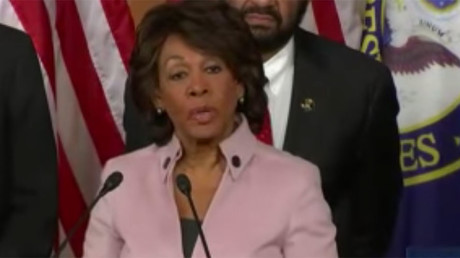 It’s far past time for Socialists like Rep. Maxine Waters (D-CA) to step aside from representing anyone, let alone upholding and defending the Constitution from enemies foreign and domestic. This poor, deranged woman is now calling for impeachment of President Donald Trump for allowing Russia to invade Korea. Yes, she actually thinks that Russia is invading Korea (insert laugh track here) and that is an impeachable offense, but neglected the ineligibility of Barack Hussein Obama Soetoro Soebarkah.

“How can a president, who is acting in the manner that he is acting, whether he is talking about the travel ban, the way he is talking Muslims, or whether he’s talking about his relationship to Putin and the Kremlin — knowing that they have hacked our DCCC and DNC and knowing that he is responsible for supplying the bombs that killed innocent children and families in Aleppo — the fact that he is wrapping his arms around Putin while Putin is continuing to advance into Korea?” said Waters.

What’s even more telling about what is going on in our government and media is the fact that not one person hearing her words corrected her that the nation that Russia is dealing with is Crimea, not Korea.

In fact, no one confronted her on the fact that the thing she squeals most about, democracy, was actually put into play by Crimea when they chose to abandon Ukraine in favor of Russia.

“I think that he is leading himself into that kind of position where folks begin to ask, ‘what are we going to do?’ and the answer is going to be, eventually, we’ve got to do something about him,” she said. “We cannot continue to have a president who is acting in this manner. It is dangerous to the United States of America.”

Acting in what manner? Not putting his nose where it does not belong? That would actually be a welcome thing.

This is a completely corrupt and anti-American woman. For instance, consider this report from Judicial Watch on her corruption.

A famously corrupt—and seemingly untouchable—congresswoman renowned for abusing her power to enrich family members is set to hold a ranking position on the powerful House committee that oversees the nation’s financial services industries.

Even for Washington this is a bit much. Democrats have chosen a scandal-plagued colleague, veteran Congresswoman Maxine Waters, to be the ranking member on the House Financial Services Committee despite her many transgressions over the years. The influential congresswoman has helped family members make more than $1 million through business ventures with companies and causes that she has helped, according to her hometown newspaper.

A few years ago Waters was investigated by the House Ethics Committee for steering $12 million in federal bailout funds to a failing Massachusetts bank (that subsequently got shut down by the government) in which she and her board member husband held shares. Read all about it in Waters’ profile on Judicial Watch’s 2011 “Ten Most Wanted Corrupt Politicians.” list.

Waters has also come under fire for skirting federal elections rules with a shady fundraising gimmick that allows her to receive unlimited amounts of donations from certain contributors. For years the veteran Los Angeles lawmaker has raked in hundreds of thousands of dollars in short periods of time by selling her endorsement to other politicians and political causes for as much as $45,000 a pop instead of raising most of her campaign funds from individuals and political action committees.

It wouldn’t be right to part without also noting some of Maxine Waters’ international accolades. She has made worldwide headlines for her frequent trips to communist Cuba to visit her convicted cop-assassin friend, Joanne Chesimard, who is also known by her Black Panther name of Assata Shakur. Chesimard was sentenced to life in prison after being convicted by a jury of the 1979 murder of a New Jersey State Trooper. With the help of fellow cult members, she escaped from jail and fled to Cuba.

House Majority Leader Nancy Pelosi tried to calm people down by saying, “When and if he breaks the law, that is when something like that will come up.”

Seriously, Nancy? You helped to pass unconstitutional legislation against the Constitution and the will of the people and more serious than that, you helped cover for the ineligibility of Barry Obama.

Don’t forget that this is also the woman who called Americans who are opposed to Sharia Law “bigots.” Yep, California, you got a real winner with this woman. Why don’t you guys stop voting for people like this, recall her, or at least give her a geography lesson?

Others have called for Trump’s impeachment because his hotels take money from foreign travelers and they’ve tried to twist the emoluments clause of the Constitution.