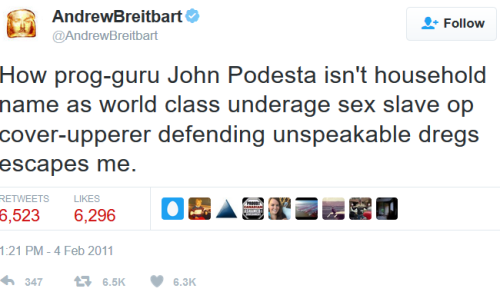 It is only recently that the Alternative Media discovered a curious tweet Breitbart had sent in 2011, in which he called John Podesta a “prog[ressive] guru” and a “cover-upperer” for a “world class” child sex slave operation.

John Podesta is a powerful, longtime Democratic Party operative whose political offices include:

A year after his Podesta tweet, walking home from a nearby restaurant shortly after midnight on March 1, 2012, 43-year-old Breitbart collapsed near his home in Brentwood, California. He was taken by ambulance to ER where he was declared dead.

On April 21, 2012, the L.A. Coroners Office released its final autopsy report that Breitbart had died from a heart attack. But Christopher Lasseter, an eye-witness of Breitbart’s collapse, said Breitbart’s face was bright red — a symptom unusual for heart attack victims, whose faces and lips typically turn blue. Bright red skin, however, is symptomatic of cyanide poisoning.

Three days before the release of the final autopsy report, Michael Cormier, a forensics technician/criminalist at the L.A. Coroners Office died suddenly from massive organ failure. Six months later on October 29, 2012, the coroner’s office released its findings on Cormier’s official cause of death as “extremely high amounts of arsenic in his system”. Police detectives and hazardous-materials officers who had searched the one-bedroom home in North Hollywood where Cormier lived with his wife, Sharon, had found no traces of poison or a suicide note.

All coincidences, no doubt.