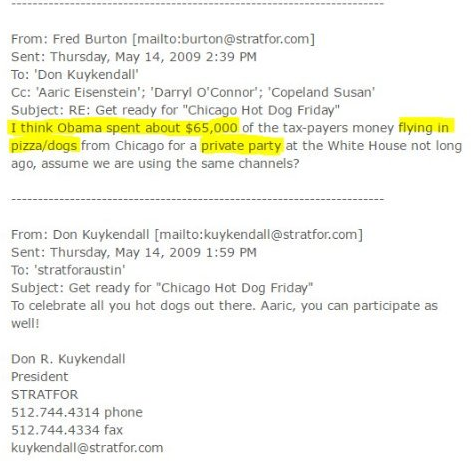 What better way to celebrate the day than a post on how much America’s former POTUS (thank you, God!) Barack Obama loves “pizzas” (and “hotdogs”) too!

On October 19, 2012, WikiLeaks released a very curious email, one of WikiLeaks‘ Global Intelligence Files of over 5 million e-mails from the Texas-headquartered “global intelligence” company Stratfor. As WikiLeaks explains:

The e-mails date between July 2004 and late December 2011. They reveal the inner workings of a company that fronts as an intelligence publisher, but provides confidential intelligence services to large corporations, such as Bhopal’s Dow Chemical Co., Lockheed Martin, Northrop Grumman, Raytheon and government agencies, including the US Department of Homeland Security, the US Marines and the US Defence Intelligence Agency. The emails show Stratfor’s web of informers, pay-off structure, payment laundering techniques and psychological methods.

The email on May 14, 2009, was from Fred Burton, Stratfor’s vice president of intelligence, to Don R. Kuykendall, then President of Stratfor (Stratfor’s president is now Dave Sikora):

I think Obama spent about $65,000 of the tax-payers money flying in pizza/dogs from Chicago for a private party at the White House not long ago, assume we are using the same channels?

Below is a screenshot:

Meanwhile, former VP Joe Biden stands in solidarity with Obama spending $65,000 of taxpayers’ dollars to fly in “pizzas” and “hotdogs” from Chicago.

For Obama’s 55th birthday last August, Biden sent him a childish friendship bracelet with beads spelling out “Joe” and “Barack”, and cute charms in the shape of a blue flower, smiley face, blue star and a slice of (“pizza”) pie. (Hollywood Reporter)

Here he is, copping a feel of 13-year-old pizza, oops, I mean daughter of newly sworn-in Senator Christopher Coons (D-Delaware) in January 2015: