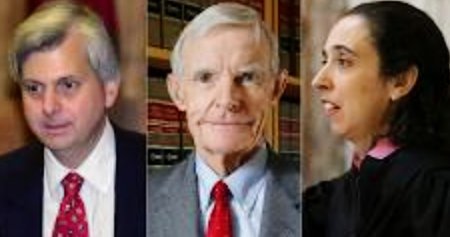 Trump’s directive, enacted by Executive Order shortly after his inauguration, directs U.S. Immigration and Homeland Security officials to halt entry from individuals who the White House says could pose a threat to national security until the agencies are able to stringently vet immigrants and visitors.

The President promptly responded to the court’s ruling on Twitter suggesting the case will soon make its way to the Supreme Court. The ALL CAPS tweet is the internet’s way of indicating that one is YELLING:

SEE YOU IN COURT, THE SECURITY OF OUR NATION IS AT STAKE!

The opinion of the 9th Circuit appears to contradict Federal Law, which gives the President the power to direct appropriate federal agencies to restrict entry into the United States from any class of aliens he determines to be detrimental to the interests of the United States.

MAJOR overstep of the Court’s power.  Their job is ONLY to look at the LAW….and if it’s been broken.  (it has not….)

But that is NOT what they did.

They made a judgement on the policy, not the law.   They effectively legislated from the bench.

(f) Suspension of entry or imposition of restrictions by President:

Federal law is clear on these matters and key provisions of President Trump’s executive order will likely stand under the scrutiny of the Supreme Court, to which incidentally, he just nominated a conservative leaning Justice who, if confirmed quickly by Congress, could well be the deciding vote.