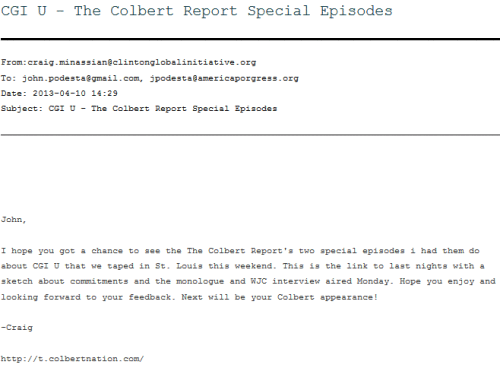 We already know that the MSM, including the major TV news networks, are blatantly biased in favor of Democrats and against conservatives.

What if I were to tell you that a major comedian-actor who made his reputation on Comedy Central’s popular news-parody series The Daily Show and now hosts the CBS Late Show, actually took direct orders from the Clinton Foundation?

That would be Stephen Colbert who joined The Daily Show in 1997, then had his own spun-off series The Colbert Report for 9 years, from 2005 to December 2014 when he left Comedy Central to succeed David Letterman as the host of CBS’s The Late Show.

On April 10, 2013, Craig Minassian, Chief Communications Officer of the Clinton Foundation, sent an email to John Podesta to bring attention to two special episdoes of The Colbert Report that he, Minassian, “had them do”:

I hope you got a chance to see the The Colbert Report’s two special episodes i had them do about CGI U that we taped in St. Louis this weekend. This is the link to last nights with a sketch about commitments and the monologue and WJC interview aired Monday. Hope you enjoy and looking forward to your feedback. Next will be your Colbert appearance!

Here’s the screenshot I took from WikiLeaks of the email: