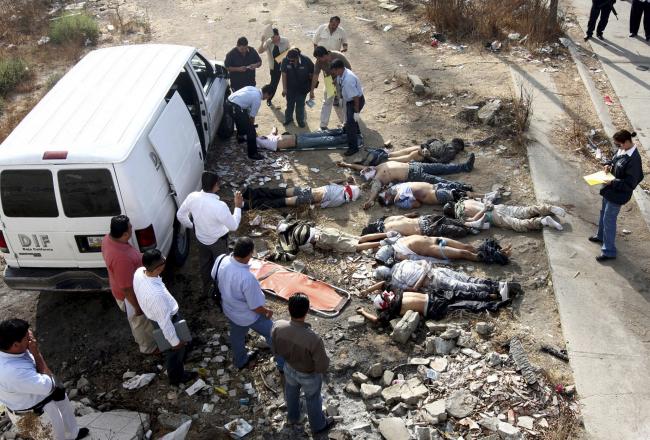 Donald Trump just signed an executive order vowing to crush criminal activity by Mexican drug cartels in the United States, making this declaration to all Americans: “I am directing DOJ and DHS to take all necessary action to break the backs of criminal cartels that have spread across our nation.” He has also talked about using US forces to aid Mexico in fighting the cartels there. “We have to do something about the cartels,” Trump said Monday while talking about the relationship between the US and Mexico on Fox News’ “The O’Reilly Factor.”

“I did talk to [Nieto] about it. I want to help him with it. I think he’s a very good man. We have a very good relationship, as you probably know. … We’ve got to stop the drugs from coming into our country. And if he can’t handle it — maybe they can and maybe they can’t or maybe he needs help — he seemed very willing to get help from us, because he has got a problem and it’s a real problem for us.”

When asked if the president of Mexico was willing to work with Trump in fighting the cartels, Trump said:

“I would rather, as a very nice man that he is and somebody I respect, I’d rather have him respond to that …But I will tell you I certainly offered him help on knocking out the drug cartels, because we have got a problem. … Don’t forget these cartels are operating in our country and they’re poisoning the youth of our country. And, by the way, countries all over the world, just so you understand — this is a cartel all over the world, the cartels. But I certainly would help him if he needed help. … And I would say the drugs and the drug cartels, number one,” he said. “Well, it’s a country that’s got difficulty.”

I hope that the US does fight and defeat the cartels. One thing I fear is the US arming one cartel to destroy another. As we read in one report:

The orders came as Trump attended the swearing-in ceremony of Attorney General Jeff Sessions, who was confirmed by the Senate Wednesday night.

The orders establish three Department of Justice task forces to fight drug cartels, reduce violent crime and reduce attacks against police. The White House did not immediately release copies of the orders.

Trump said he was seeking “to break the back of the criminal cartels that have spread across our nation and are destroying the blood of our youth.” The cartel task force would partner the DOJ and the Department of Homeland Security.

Law and order was a central theme of Trump’s campaign, during which he also pushed his hardline immigration policies. But he has also prioritized tackling violent crime, recently promising on Twitter that if Chicago didn’t get its crime problem under control, he would “send in the Feds.”

“A new era of justice begins and it begins right now,” Trump said at the ceremony.

If you doubt that masses of human beings are being ritually sacrificed as we speak on the altar of Mesoamerican gods, then watch this just-released documentary. Behold, the human slaughterhouses in Mexico and the United States. The compelling, shocking and eye-opening documentary makes it impossible to deny: a quarter million people (and rising), butchered. This is a holocaust that dwarfs anything ISIS ever produced, all because millions in the Americas chose to hate their Christian heritage opting instead to adhere to the paganism of Mesoamerica. This is why I spent almost a year on a documentary on the realities of Mexico and the horrors that go on there. Its called Hell Across the Border. Watch it today and tell everyone you know about it:

While the cartels devastate Mexico, there are still courageous Christians there who are willing to fight against the satanic narcos (as you will see in the above documentary). They have taken up arms to fight against the narcos and have defeated them in numerous battles. These Mexican militias, like the Cristeros of old, actually inspired me when I was writing my book, Christianity Is At War, which is the most exhaustive study ever written on the subject of Christian militancy and holy war. If you truly want a full comprehension on the subject of war far in the Christian faith, then get this book. You will not be disappointed! Bible studies will never be the same again, after reading Christianity Is At War.