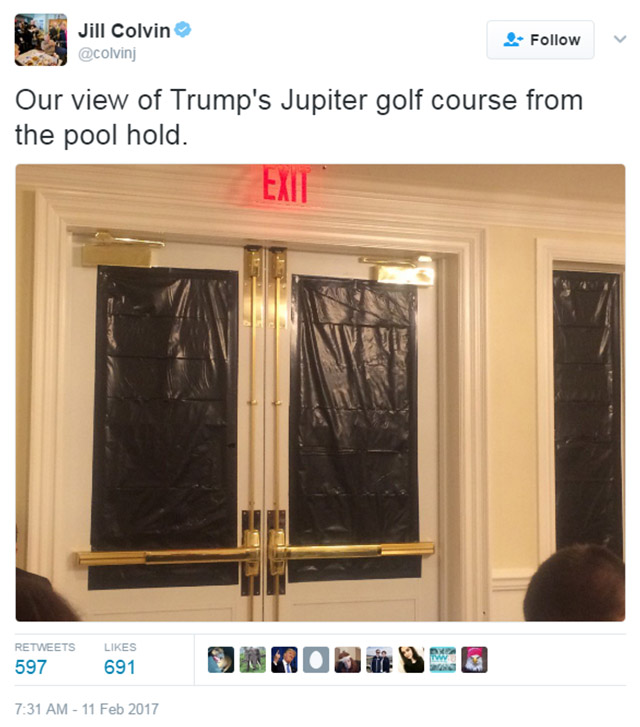 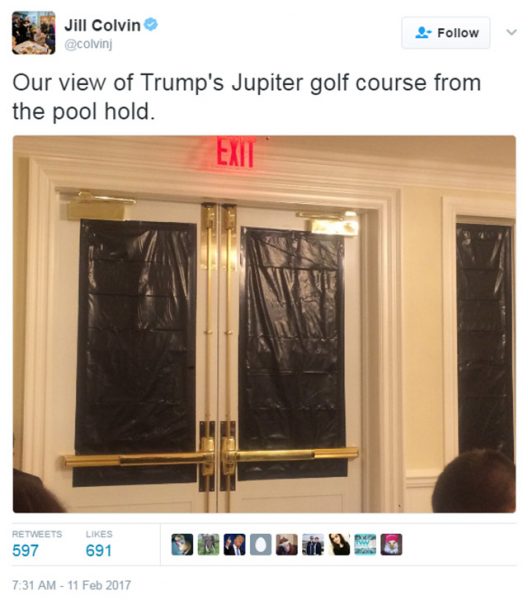 President Trump set the press up in the basement of his Florida golf club Saturday while he golfed privately with Japanese Prime Minister Shinzo Abe.

To prevent the press from taking photographs, the windows were covered with what appear to be plastic trash bags, no doubt to signal to the lying press where they belong.

Trump and Abe are at the president’s Jupiter, Fla., golf club for the weekend after a meeting and press conference Friday at the White House.

Trump tweeted photos of the two from the golf course, but reporters in both his and Abe’s press pools shared photos from inside the golf club, where they were left during the golfing session. One pool reporter tweeted that the pool reporters were staying in a basement suite where windows were covered with black plastic to keep the journalists from seeing out onto the course.

A White House pool report said that photographers were instructed not to take pictures on the grounds of the “private club.”

Trump's press corps has been placed in a basement suite at Jupiter golf club. Black plastic over windows to give Trump privacy as he golfs. pic.twitter.com/8zbqi5HGSD

Japanese press are holed up with us at Trump Jupiter, no better access to their leader. Not clear if US side or Japan side vetoed golf pix. pic.twitter.com/cER07VSN1N

Trump high-fives Japan's prime minister.
Administration took pains to keep press from shooting pix of them, but Trump tweeted one he likes. https://t.co/tWwA9VRq6f I’ve never been more proud to call myself an American.