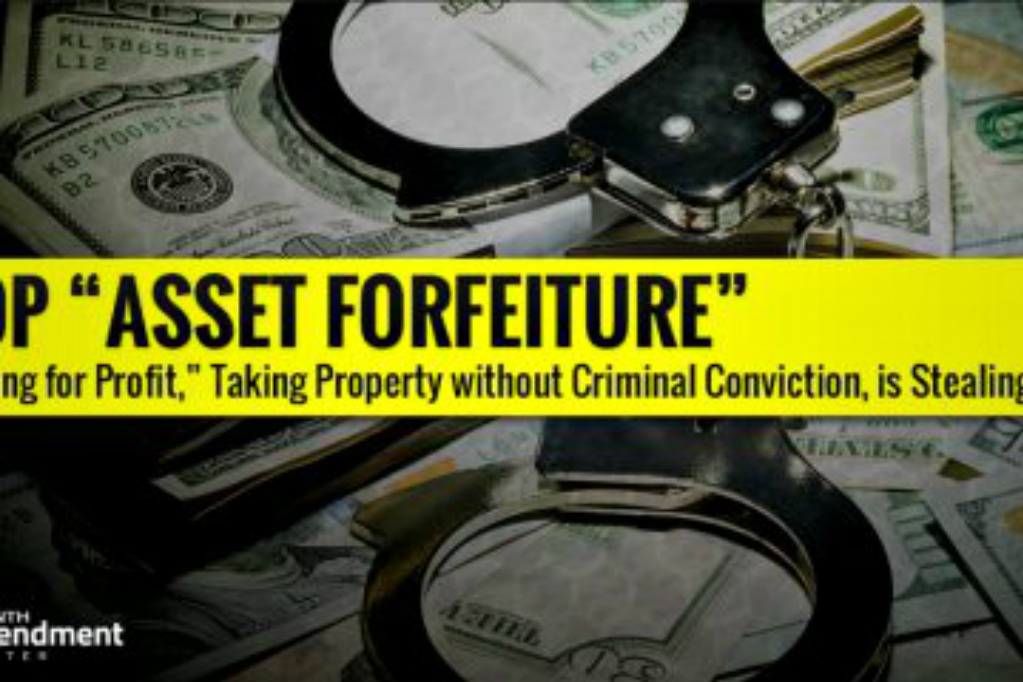 Civil forfeiture in the United States, sometimes called civil judicial forfeiture or occasionally civil seizure, is a controversial legal process in which law enforcement officers take assets from persons suspected of involvement with crime or illegal activity without necessarily charging the owners with wrongdoing.

I am not here to attack our President. His first few weeks in office have been nothing short of amazing.

In the span of less than one month he has already advanced the cause of conservatism further than President George W. Bush did in 8 years. However, I don’t believe I’d be doing my job properly if I didn’t hold President Trump accountable when he goes astray.

So, let’s begin. Today I’m here to tell President Trump that he is wrong about Civil Asset Forfeiture.

I’ve written on this issue more than a few times (here, here, here, and here), but it seems like I have to come back to the subject once more.

President Trump met with sheriffs from around the country on Tuesday and listened as some of them worried about conservatives’ fight against Civil Asset Forfeiture. Jefferson County, Kentucky Sheriff John Aubrey whined that conservatives fear the police might take private property from innocent citizens without due process. Aubrey argued that law enforcement “only” takes the property of “dope dealers” and others connected to criminal activity. Another sheriff, Rockwall County, Texas Sheriff Harold Eavenson complained specifically about Texas state Senator Konni Burton (R-TX), who has introduced legislation to end the practice of Civil Asset Forfeiture. “We’ve got a state senator in Texas that’s talking about introducing legislation to require conviction before we can receive that forfeiture money,” Eavenson told the President.

To which the President responded, “Do you want to give me his name? We’ll destroy his career.”

President Trump: "Do you want to give me his name? We'll destroy his career" https://t.co/nm4f0UplZP pic.twitter.com/yAAm5BtOh0

Here’s the thing… I don’t think that President Trump truly understands what Civil Asset Forfeiture is, and why conservatives have been fighting tooth and nail to end the practice.

Conservatives are not concerned about private property seized from criminals in the process of committing a crime.

No, we are concerned with the ugly incentive the practice creates for law enforcement to seize property from citizens who are not engaged in any kind of criminal behavior.

Civil asset forfeiture allows cops and federal agencies such as the FBI to seize cash and property of suspected criminals but it doesn’t require them to bring any charges against their targets or even show that they were in any way involved with wrongdoing.

In 2014, for instance, a Philadelphia couple had their house seized after police arrested their son for possessing $40 worth of heroin while living there. The parents weren’t charged with any crime but in Pennsylvania and many other states, owners of seized property must prove their innocence to get their stuff back.

Here are a few examples from the Daily Caller:

These are just a few of the examples from the Daily Caller, and the folks at the Heritage Foundation have a few others.

Cases like that of “Victor Guzman, a church secretary from El Salvador, was pulled over by a Virginia trooper for speeding. When he revealed to the officer that he was carrying $28,500 in cash from parishioners’ donations, which he was going to use to buy land for the church, the trooper seized it.”

It’s not just local police, but state and federal law enforcement that have also abused the practice.

These cases are not isolated, There have been hundreds of documented instances of law enforcement misusing civil asset forfeiture.

In fact, the state Senator that President Trump and the sheriffs joked about destroying isn’t even trying to end civil asset forfeiture; no, she’s just trying to protect innocent people from having their private property rights abused.

To this end, I am filing a major reform package which keeps asset forfeiture in the toolbox of law enforcement but creates reasonable protections for citizens, requires proper reporting on the use of forfeiture, and raises the legal standard for the government to engage in the taking of property. Property rights are the foundation of any free system of government, and we have allowed the government to erode them in the name of law and order. We must do better and I intend to lead the charge.

After hundreds (perhaps even thousands) of examples of impropriety and private property abuses, civil asset forfeiture reform has become a necessity. Most conservatives who support the reform are not calling for a complete end to the process, they are simply calling for more protections for the private property of innocent citizens. It is not too much to ask that the government protect the private property rights of those not found guilty of committing a crime; indeed that is the very least the government could do.

President Trump is wrong on civil asset forfeiture, and it is important that we who support his efforts as president make sure he understands why the practice must be curtailed.