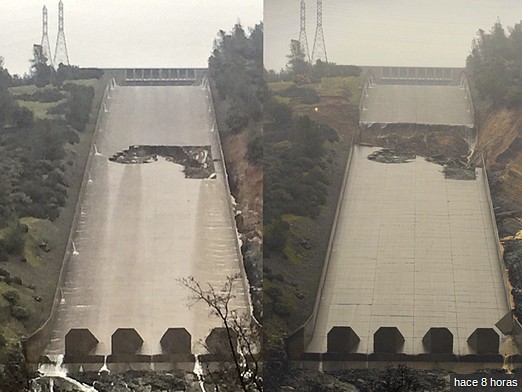 Nearly 200,000 people had to be evacuated from the floodplain beneath Oroville Dam, when an earthen emergency spillway threatened to disintegrate under the sheer volume of floodwater putting pressure on the structure — the exact scenario federal and state officials were cautioned about over a decade ago.

But they didn’t heed the warning.

“Three environmental groups — the Friends of the River, the Sierra Club and the South Yuba Citizens League — filed a motion with the federal government on Oct. 17, 2005, as part of Oroville Dam’s relicensing process, urging federal officials to require that the dam’s emergency spillway be armored with concrete, rather than remain as an earthen hillside,” reports the Mercury News.

That motion was filed with the Federal Energy Regulatory Commission when the groups found Oroville Dam — the tallest in the United States and completed in 1968 — did not meet modern safety standards. Heavy rains and flooding, they said, would overwhelm the primary concrete spillway and force waters over the emergency spillway — but the volume could erode the earthen chute and inundate communities nearby.

Worse, such an extreme event could cause failure, or “loss of crest control.”

“A loss of crest control,” the environmental groups asserted, “could not only cause additional damage to project lands and facilities but also cause damages and threaten lives in the protected floodplain downstream.”

Considering the risk to life and limb to those situated beneath the looming dam, the suggestions seemed pertinent, but officials — bowing to budgetary and financial concerns — didn’t listen.

“FERC rejected that request, however, after the state Department of Water Resources, and the water agencies that would likely have had to pay the bill for the upgrades, said they were unnecessary,” the Mercury News explains. “Those agencies included the Metropolitan Water District of Southern California, which provides water to 19 million people in Los Angeles, San Diego and other areas, along with the State Water Contractors, an association of 27 agencies that buy water from the state of California through the State Water Project. The association includes the Metropolitan Water District, Kern County Water Agency, the Santa Clara Valley Water District and the Alameda County Water District […]

“A filing on May 26, 2006, by Thomas Berliner, an attorney for the State Water Contractors, and Douglas Adamson, an attorney for the Metropolitan Water District of Southern California, discounted the risk. It urged FERC to reject the request to require that the emergency spillway be armored, a job that would have cost tens, if not hundreds, of millions of dollars.”

Officials blew off concerns as hyperbolic since the earthen spillway had been designed to accommodate 350,000 cubic feet per second, and — in extreme circumstances — could safely sustain heavy damage without being completely destroyed.

“It is important to recognize that during a rare event with the emergency spillway flowing at its design capacity, spillway operations would not affect reservoir control or endanger the dam,” wrote John Onderdonk, a senior civil engineer with FERC, in the Federal Energy Regulatory Commission’s San Francisco Office, in a July 27, 2006, memo to his managers.

On Sunday, with the main concrete spillway having partially collapsed earlier in the week, swiftly rising waters had to be released over the emergency spillway to relieve pressure — for the first time it has been used in its five-decade history.

Given officials’ confidence in the earthen spillway, Sunday’s flows of between 6,000 and 12,000 cubic feet per second — just five percent of what FERC declared safe — should not have caused issues or forced emergency evacuations.

Those who warned of the dangers in 2005 saw their fears nearly come to fruition.

“We said ‘are you really sure that running all this water over the emergency spillway won’t cause the spillway to fail?’” Ron Stork of Sacremento’s Friends of the River told the Mercury News. “They tried to be as evasive as possible. It would have cost money to build a proper concrete spillway.

“I’m feeling bad that we were unable to persuade DWR and FERC and the Army Corps to have a safer dam.”

Eric See, California Department of Water Resources spokesman, denied reports there had been any lapse in safety at Oroville Dam, despite reports of the over-decade-old warning to FERC.

Now, a temporary break in storms has provided an opportunity for workers to shore up the spillways and prepare for a predicted eight to ten inches of rain forecast this week.

“I’m sad and hoping, crossing my fingers, that they can prevent the reservoir from failing,” said Stork. “I don’t think anybody at DWR [Department of Water Resources] has ever been this close in their careers to such a catastrophic failure.”