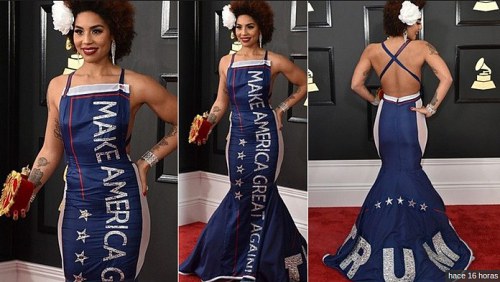 Here’s an indicator of just how popular he is.

A singer of whom I — and probably you, too — had never heard has the guts to buck Hellywood’s zombie group-think by wearing a patriotic red, white and blue gown with the words “Make America Great Again” and “Trump” at Sunday night’s Grammy Awards.

“I am 100 percent a Trump supporter. I believe in his message, I believe he will run this country like he runs his life, successfully. I stand as a proud American and I stand for a unified America that is tolerant of each other no matter who we voted for. I stand behind our President because that’s the American thing to do. I believe in love, above all.”

“Go big, or go home. You can either stand for what you believe or fall for what you don’t. Above all make a choice for tolerance and love. Agree to disagree.”

But Villa and her gown received vicious, hate messages from the always-tolerant Left. Below is a sample, beginning with a one-word message, “Die,” from @kevinrizzi:

Andre Soriano, the designer of Villa’s gown, said on Instagram the gown is a “tribute [to] OUR President Of The United States Of America” adding the hashtag #MAGA.

Soriano is an immigrant from the Philippines. A tolerant Progressive named David X Lodger wrote this on Soriano’s Facebook page:

Wow Andre Soriano, you dumb as fuck, ain’t ya… if you love America so much – go back to the Philippines where Trump thinks you belong…. self-hating dumbass

To which Soriano gave this response:

Peace be with you.

I tried to get on Soriano’s website http://www.andresoriano.com/, but kept getting a “Service Unavailable” message, most likely because the website crashed from the sheer volume of people trying to access it.