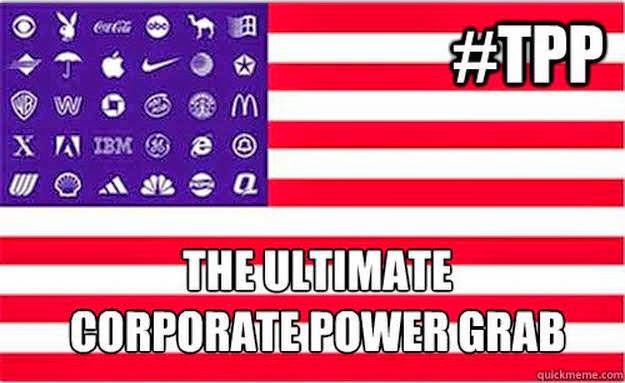 On January 23rd, many Americans rejoiced as Donald Trump formally withdrew the United States from the TPP.

The only problem is, the TPP is about to get replaced with something even worse.

Quietly in the background, discussed in meetings even more secretive than those under which the TPP was negotiated, some 50 countries have been formulating the Trade in Services Agreement known as TiSA.

Negotiations for TiSA have been going on since April 2013 and have primarily been led by the US, the EU, and Australia.

Coming to the TiSA negotiations, it is common knowledge that three members—the US, the EU, and Australia—led the negotiations for the past five years ostensibly for crafting an “ambitious” and “comprehensive” trade agreement. It is supposed to be based on the best provisions of the bilateral and regional trade agreements already signed by some of the participants. (source)

So far these nations have gone through at least 21 rounds of negotiations on this agreement.

So, why is TiSA so bad? What would TiSA do?

The Trade In Services Agreement (TISA) … if passed would prohibit regulations on the financial industry, eliminate laws to safeguard online or digital privacy, render illegal any “buy local” rules at any level of government, effectively dismantle any public advantages to be derived from state-owned enterprises and eliminate net neutrality.

Earlier draft versions of TISA’s language would prohibit any restrictions on the size, expansion or entry of financial companies and a ban on new regulations, including a specific ban on any law that separates commercial and investment banking, such as the equivalent of the U.S. Glass-Steagall Act. It would also ban any restrictions on the transfer of any data collected, including across borders; place social security systems at risk of privatization or elimination; and put an end to Internet privacy and net neutrality. It hasn’t gotten any more acceptable.

As Counterpunch put it, the implementation of TiSA will be the equivalent of letting megabanks decide what is good for us, as “not even the TPP contemplated the entire elimination of regulations of any kind against the financial industry.”

Counterpunch also notes that, “Hypocritically, TISA would prohibit developing countries from adopting measures that countries like the United States used to facilitate its industrial development when it was an emerging country in the 19th century.”

Interestingly, China has been kept out of TiSA negotiations specifically at the behest of the United States:

Significantly, the US has ensured that China is kept out of the TiSA brigade, despite overwhelming support for its inclusion. The US repeatedly blocked Beijing’s application for joining the TiSA talks in 2012, despite support from the EU and a majority of the participants. Meetings were largely held at the American, EU, and Australian missions in utter secrecy. At times, the participants also congregated at the Centre William Rappard that houses the WTO. (source)

One thing is clear; TiSA has always been the backup plan in case the TPP and TIPP failed. In fact, TiSA was reportedly modeled directly off of the TPP.

Although Trump did mention reinstituting Glass-Steagall on the campaign trail, filling his cabinet to the brim with Goldman Sachs and even House of Rothschild now that he has been elected seems to directly contradict that sentiment.

So… what will Donald Trump do with TiSA?