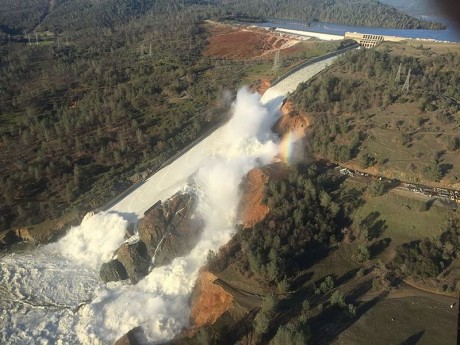 The situation at the Oroville Dam has stabilized for the moment, but more storms are coming this week.  When those storms arrive, will authorities be able to avoid the kind of catastrophic incident that almost happened over the weekend?  As you will see below, it is being admitted that a collapse of the emergency spillway at Lake Oroville would have sent a “30-foot wall of water coming out of the lake” and into local communities.  At one point authorities were concerned that such a collapse was imminent, and that is why they ordered the evacuation of nearly 200,000 people.  But many are also concerned that more storms could ultimately cause a catastrophic failure of the infrastructure at the dam that would bring about a “worst case scenario”.  According to the experts, if that were to occur we could potentially see a 100 foot tsunami of water wiping out entire cities.

At 770 feet tall, the Oroville Dam is 44 feet taller than the Hoover Dam.  In fact, it is actually the tallest dam in the United States, and it is a crucial part of the network that supplies water for southern California and the key agricultural regions of the state.

So how did we get to the point where entire towns were almost wiped out?  The following is a pretty good summary of the events that we have witnessed so far…

The problems started last Tuesday, when a hole opened up in the Oroville Dam’s primary spillway. The collapse in this main, concrete-lined spillway led authorities to take an unprecedented step by the end of the week, as heavy storms mounted. On Saturday, the state water agency opened up the dam’s emergency spillway for the first time ever. Its collapse would have sent a “30-foot wall of water” crashing out of the lake reservoir, according to the Los Angeles Times. The emergency spillway, also described as the auxiliary spillway, is more or less a hill that drains down into the Feather River.

Fortunately the emergency measures that were taken over the weekend averted a major collapse of the emergency spillway, but it was a very close call.

Nearly 200,000 people were ordered to evacuate just in case, and needless to say this created a lot of panic and roads that were extremely clogged as local residents scrambled to get away from potential disaster…

“What was usually a 20-minute drive took two hours,” said Heather Sutton, 22, a Yuba Community College student. “It was bumper to bumper. … You can almost see the panic happening.”

Sutton recalled telling her friend before they evacuated that “we need to grab photos, anything that has sentimental value.” Everything else was left behind, she said.

The sudden evacuation panicked residents, who scrambled to get their belongings into cars and then grew angry as they sat in bumper-to-bumper traffic hours after the order was given.

And it is a very good thing that authorities did order the evacuation, because we came very, very close to seeing a “30-foot wall of water coming out of the lake”.  The following comes from the L.A. Times…

The biggest concern was that a hillside that keeps water in Lake Oroville — California’s second largest reservoir — would suddenly crumble Sunday afternoon, threatening the lives of thousands of people by flooding communities downstream.

With Lake Oroville filled to the brim, such a collapse could have caused a “30-foot wall of water coming out of the lake,” Cal-Fire incident commander Kevin Lawson said at a Sunday night press conference.

Of course that isn’t the worst case scenario.

The worst case scenario would be if there is a catastrophic failure of the infrastructure holding Lake Oroville back from pouring into the communities below.  With more storms heading for the region, authorities are trying very hard to prevent that from happening.  The following comes from the Daily Mail…

Officials have been inspecting the nation’s tallest dam since first light this morning in a desperate effort to stop a devastating 100-foot tsunami from being unleashed, as 200,000 people remain under evacuation orders across California despite water levels dropping over night.

Concerned authorities warned in the worst case scenario a complete structural breakdown at the emergency spillway of Oroville Dam would unleash a torrent of water that would engulf Oroville within an hour.

The ensuing flood from the 770-foot dam would catastrophically put the city of Oroville and several other low-lying communities along the Feather River under 100ft of water.

It would be a flooding disaster unlike anything that we have ever seen in modern American history.

Forecasters anticipate a moderate storm Wednesday with a “really big and strong” storm Friday, said Brandt Maxwell, National Weather Service meteorologist. Another 8 inches of rain could fall in the mountains before draining into Lake Oroville, and that would increase the flow of water at the dam where severe erosion could drop the top of the spillway enough for water to pour out uncontrolled.

Eight inches may not sound like a lot to you, but the truth is that is a tremendous amount of rain.

If the region really does get that much precipitation, Lake Oroville will once again be bursting at the seams and more evacuations may be necessary.

This entire crisis is just another example of how America’s critical infrastructure is literally falling apart all around us.  In California alone, Governor Brown has identified 100 billion dollars worth of key projects that urgently need to be done, and Oroville Dam was not even on that list…

The priority list prepared by California follows calls by President Donald Trump for $1 trillion in infrastructure projects nationwide. The list was prepared at the request of the National Governor’s Association.

President Trump is certainly right to want to address our massive infrastructure crisis, but where is he going to get the money?

Every extra dollar that the federal government spends is another dollar that we have to borrow, and foreigners are already heavily reducing their holdings of U.S. debt.

So I definitely applaud President Trump for wanting to do something about our crumbling infrastructure, but unless he can make money grow on trees it may be difficult to actually accomplish the big goals that he is envisioning.