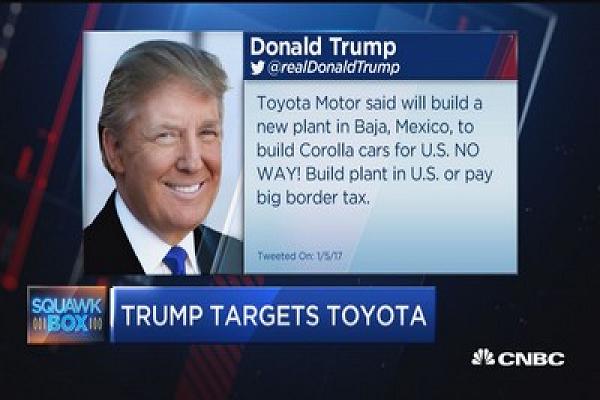 I’ll get to the devious word-manipulation in a minute, but first a bit of background.

Their goal: stop Trump from laying tariffs on goods exported to America.

Trump has announced a simple and straightforward idea. If US companies shut down factories here and set them up in Third World hell holes, with slave labor and no environmental rules, and then export those goods back to the US, they’ll have to pay a stiff tariff.

That tariff will cut them off at the knees. They won’t be able to sell their products so cheaply here. In fact, they’d be better off re-opening their factories in the US and re-employing all those workers they threw out of jobs when they left the US.

Trump’s other obvious idea: countries where the labor is cheap have their own native companies, of course, who are producing goods and exporting them to the US—undercutting American companies who make the same products. Those foreign companies would also have to pay a stiff tariff, putting them on an equal footing with US manufacturers.

Globalists hate these plans. They want predatory corporations to roam free all over the world, gutting economies, and exporting their products to one and all, without paying tariffs.

This is what 50 years of conferences (1945-1995) on the treaty called GATT were all about. Knocking out tariffs. The General Agreement on Tariffs and Trade culminated in the creation of the World Trade Organization (WTO), a pillar of the new world economic order.

Now, there is panic as Trump appears to be going after the WTO and its grand foundation.

And so we come to the word-manipulation.

Here are current news headlines. Read them and then I’ll explain.

Reuters: “Retail CEOs head to Washington to try to kill US border tax.”

There are many more headlines along the same line. And they all mention “border tax.” What are they talking about?

Well, “border tax” equals “tariff,” a word that has been used since the founding of the American Republic. But suddenly the memo has gone out to mainstream news to use this other term instead.

Why? Because “border tax” suggests the idea of a tax connected with immigration, as in “border.” Yes, tariffs are traditionally collected at a nation’s border (a port) when imported goods arrive. But no one had been calling a tariff a border tax until now, when Trump is under heavy fire for his temporary immigration ban.

In order to pile on, and give a negative twist to the idea of a tariff, conflating it with immigration, we have “border tax.” Another bonus: everyone dislikes more taxes. So “border tax” has two negatives.

And tariffs are (immigration) border taxes.

In the same way, sheer corporate greed (demanding an end to tariffs) has long been called “free trade.” It sounds positive. It’s the opposite of “slave trade.” More language manipulation. Wouldn’t you prefer being free to being a slave?

When “new world order” and “new international economic order” came into vogue, decades ago, the psyop was based on the idea that “new” was preferable to “old,” and “order” was much better than “chaos.”

Of course, “new world order” backfired, because millions of people saw through it.

Hopefully, the same thing will happen now to “border tax.”

As in: “Why yes, borders are good. They should be solid and well defined and protected. And that’s where tariffs are collected. Plus, draconian corporations should pay their taxes. Border-tax. It’s a terrific idea. Let’s do it.”