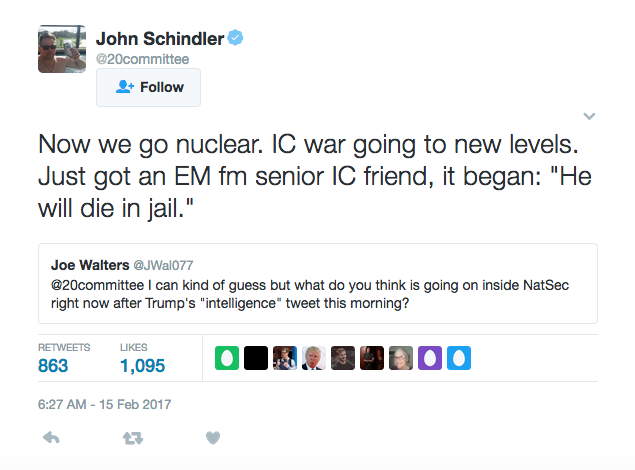 Washington, D.C. – The United States is entering an extreme and unprecedented political crisis in the form of a soft coup by the deep state. Politicians on both sides of the aisle have publicly called out these elements of the “intelligence-industrial complex” that are actively working to undermine, discredit and forcibly remove President Trump.

Amazing battle for dominance is playing out between the elected US govt & the IC who consider themselves to be the 'permanent government'.

Now we go nuclear. IC war going to new levels. Just got an EM fm senior IC friend, it began: "He will die in jail."https://t.co/e6FxCclVqT

Speaking to this soft coup and smashing the left/right paradigm, on Tuesday, former Cleveland Democratic congressman Dennis Kucinich boldly stated that, “There’s something wrong going on here in the intelligence community,” in calling out the real reason behind the forced resignation of National Security Advisor Michael Flynn.

Kucinich urged Trump to take control, and locate where the leakers are so he and the American people will know the truth. Kucinich said members of the intelligence community want to reignite a Cold War between the United States and Russia so the military, industrial and intelligence “axis” can “cash in.”

A game is being played with the security of our country. Pls watch & share this is important. #DeepState https://t.co/zh8yRbyhjb

While on the opposite side of the aisle, California Congressman Devin Nunes (R), chairman of the House Committee on Intelligence, proclaimed that the nine intelligence officials who leaked the contents of Flynn’s phone call should be locked up for leaking classified intelligence.

“That’s nine leakers that all belong in jail,” he said. “Those nine people broke the law, clearly, by leaking classified information to anybody.”

This all comes in the wake of the nation’s top security official, National Security Advisor Flynn, being forced to resign after leaks from the IC revealed that he gave “incomplete information” to Vice President Mike Pence and others about the conversations he had with the Russian ambassador prior to Trump taking office.

Flynn has since publicly stated that he “crossed no lines” during an interview with The Daily Caller. Obviously, an experienced intelligence official like Flynn was completely aware of the signals intelligence on Russian diplomats, thus making it extremely unlikely that he would say anything that could be construed as violating the law.

Just remember, it’s not what Flynn said, it’s who he talked to – the Russians – as it is standard operating procedure for incoming officials to talk to diplomats from other countries. The neoliberal and neocon forces are determined to push a new Cold War with Russia, and will not allow for Trump’s intended rapprochement.

When intelligence officials are using their position to leak details to the press in an effort to control the public narrative in hopes of delegitimizing a sitting president, make no mistake that the politicians are no longer in control of the United States – the intelligence apparatus is in control.

Think about the implications of what is taking place; any person running for public office can essentially be manipulated by the intelligence that the NSA has collected on them. The information can then be anonymously leaked to destroy anyone the intel apparatus chooses, thus giving them total control.

The depth of this political crisis cannot be overstated, as the deep state war on Trump could spiral out of control with grave consequences, including the risk of an actual Civil War.

As noted by respected geopolitical analyst The Saker:

At the risk of sounding over the top, I will say that what is happening now is putting the very existence of the United States in danger almost regardless of what Trump will personally do. Whatever we may think of Trump as a person and about his potential as a President, what is certain is that millions of American patriots have voted for him to “clear the swamp”, give the boot to the Washington-based plutocracy and restore what they see as fundamental American values.

If the Neocons now manage to stage a coup d’etat against Trump, I predict that these millions of American will turn to violence to protect what they see as their way of life, their values and their country. In spite of the image which Hollywood likes to give of them, most Americans are peaceful and non-violent people, but if they are pushed too far they will not hesitate and grab their guns to defend themselves, especially if they lose all hopes in their democracy. And I am not talking only about gun-toting hillbillies here, I am talking about the local, state and county authorities, who often care much more about what their local constituents think and say than what they are up to in DC. If a coup is staged against Trump and some wannabe President à la Hillary or McCain gives the order to the National Guard or even the US Army to put down a local insurrection, we could see what we saw in Russia in 1991: a categorical refusal of the security services to shoot at their own people.

This is a very prescient warning given the volatile political atmosphere in the United States. It should be noted that the confluence of deep state forces in this soft coup against Trump includes Clinton political operatives of the Brock/Podesta/Soros ilk, neocons represented by McCain/Graham, and intelligence operatives in the security apparatus.

Essentially, the losers of the election refuse to submit and have determined that they will wage total war on Trump in an effort to force regime change – elections be damned.

In fact, the dynamics at play are much larger in scope and volume than what most people understand, as they are part of a full spectrum war, utilizing tactics from various global Color Revolutions, to force regime change in the United States. The neocons and neoliberals have virtual control of the Congress, the media, courts, and parts of the intelligence apparatus.

From the time of Bill Clinton until now, these elements have deeply penetrated the Pentagon, Foggy Bottom, and the three letter agencies. Even the Fed is largely aligned with these globalist forces.

So, how can President Trump survive this soft coup?

Trump has only one chance for his political survival.

When Putin came to power he inherited a similar situation in the Kremlin, which was every bit as corrupt and traitor-infested as the White House in which Trump now finds himself.

The manner in which this operation would be conducted would be a methodical FBI crackdown on the forces fomenting the soft coup by investigating the plotters on charges of corruption, abuse of power, conspiracy, obstruction of justice, and all the other types of behavior which have gone on forever in Congress, the intelligence community and the media.

Trump could start by instructing FBI Director James Comey to tenaciousiosly investigate criminal activity of those elements involved in the plot. Essentially, he would deal with the coup plotters in the same manner as Putin handled the oligarchs in Russia or how the U.S. took down Al Capone – tax evasion charges, etc.

With the removal of Flynn, Trump is now surrounded by forces that are largely hostile to his stated goal of peace with Russia. The major difference between what Putin faced and what Trump now faces is that the forces aligned against Putin never saw him coming.

Trump’s only choices for political survival are to strike immediately and strike hard, or to cave to the neolibcon line on Russia. Judging by his tweet regarding Crimea this morning, it seems that Trump may be capitulating to the forces intent on his destruction in an effort to save his presidency from total ruin.

Crimea was TAKEN by Russia during the Obama Administration. Was Obama too soft on Russia?

To survive the soft coup attempt, without bending to the neolibcon will, Trump must use the FBI to clean house and deliver a steady stream of indictments for corruption, conspiracy to [fill the blank], abuse of authority, obstruction of justice and dereliction of duty, etc. Since such crimes are widespread in the current circles of power, they are also easy to prove and cracking down on corruption would get Trump a standing ovation from the American people.

This is the only way Trump will survive the ongoing coup attempt by the various deep state operatives, working in concert with Clintonian media proxies, is to undertake a widespread anti-corruption campaign aimed at those attempting to overthrow the current U.S. government.

While one may not support Trump’s politics or agenda, make no mistake that those involved in this soft coup are doing nothing less than engaging in treason against the United States.