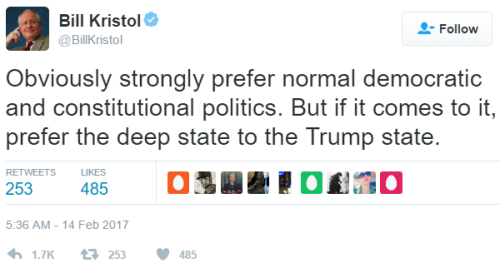 On February 13, General Mike Flynn resigned from being President Trump’s national security adviser and apologized for telling then-VP-elect Mike Pence an untruth — that Flynn had not discussed the issue of sanctions with Russia’s ambassador to the United States. Reportedly, Flynn resigned in lieu of being outright fired.

President Trump did the right thing in removing Flynn because he cannot have, as his adviser, someone who lies and who might have violated the law (Logan Act) in speaking with and negotiating with the Russian ambassador without Trump’s authorization.

But this matter is more than “just” the removal of a dishonest aide because it has to do with how Flynn’s conversation with the Russian ambassador came to light in the first place. Only U.S. intelligence agencies could have accessed, by illegally wiretapping, Flynn’s conversation, and then leaked the transcript of the conversation to the MSM who are just chafing at the bit to find anything to take down Trump’s presidency.

In the last weeks of the Obama administration, the intelligence agencies were complicit in an effort to subvert the November 8 election with wholly unverified and unfounded allegations that Russia had intervened in the election by hacking and leaking to WikiLeaks damaging emails of the DNC, Hillary Clinton, and the chair of her campaign John Podesta. Trump responded that, as President, he will reform the intelligence agencies, beginning with the CIA.

At the time, Sen. Chuck Schumer (D-NY) darkly warned that Trump would be “really dumb” to take on the intelligence community because “they have six ways from Sunday of getting back at you.” Asked if this was a threat against Trump, former Senator Ron Paul (R) said, “I think he [Schumer] is speaking the truth there — better watch out. I think Trump knows about it. That’s why he has private security.” (See my post “Trump’s war with the CIA”)

The take-down of Mike Flynn was the first shot at the Trump administration from the intelligence agencies that are bureaucracies in the executive branch of the U.S. government over which President Trump presumably is the head. The intelligence agencies’ illegal wiretapping of Flynn’s phone conversation and transmission of the transcript to the MSM therefore is an act of revolt, pure and simple. As Thomas Lifson of the American Thinker points out:

Make no mistake: we have just witnessed an operation by members of the CIA to take out a high official of our own government. An agency widely believed to have brought down democratically elected governments overseas is now practicing the same dark arts in domestic American politics. Almost certainly, its new head, [CIA Director] Mike Pompeo, was not consulted . . . .

Note that the law was broken by whoever leaked the transcripts to the media. Not only is the crime underlying the “scandal” being ignored, but the criminals are being hailed. On Morning Joe‘s first hour today, the host, a former congressman (i.e., a lawmaker) himself, called the leakers “heroes.” …

The Flynn Affair is a huge scandal, all right. But the media are misdirecting our attention toward the lesser dimension while they studiously ignore the real threat to our democracy.

This interference in domestic politics by the CIA should be regarded as a major threat to our democracy, but of course our Trump-hating domestic media are reveling in a major point scored against the new president.

To make matters even worse, the leak of Flynn’s conversation is only one of several leaks from the Trump administration. In a series of tweets, President Trump identifies the problem:

On the intelligence agencies’ takedown of Flynn, neo-conservative Bill Kristol, founder and editor at large of The Weekly Standard and a network political commentator, tweeted:

Kristol’s declaration that he prefers the unelected “deep state” to the constitutional government of duly-elected President Trump is nothing other than Kristol’s admission that he supports a coup d’état.

One of Donald Trump’s campaign slogans was “Drain the Swamp”. President Trump must thoroughly excise the rot in the intelligence agencies, beginning with the CIA and the National Security Agency (NSA) — Gen. Flynn would have been director of the NSA. Attorney General Jeff Sessions and the FBI must arrest the wiretappers and leakers, the reporters who solicited and received the transcript from an illegal wiretap, as well as Bill Kristol for openly advocating and fomenting treason against the United States (as per Article III of the U.S. Constitution).

The continuation of Trump’s presidency and his very life depend on it.