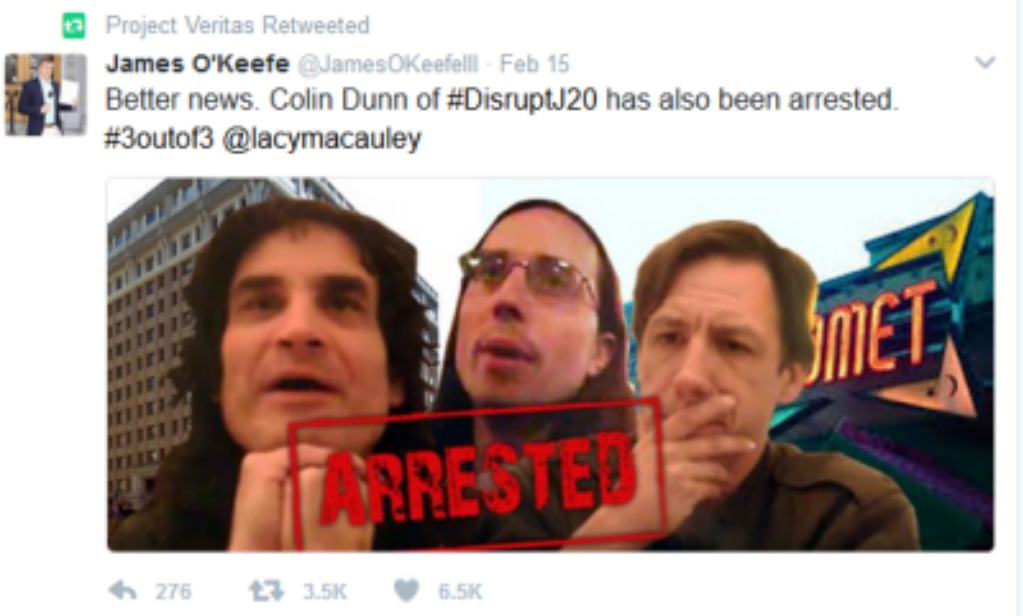 Members of DisruptJ20 were captured on video in Pizzagate’s Comet Ping Pong pizzeria discussing how they would disrupt the pro-Trump Deploraball on the night of January 19 at the National Press Building, Washington, DC, by releasing butyric acid stink-bombs into the ventilation system and setting off fire alarm sprinklers.

Those plans are outright terrorism and in violation of D.C. Code 22-3571.01(6) that carries a 5-year prison sentence:

“It shall be unlawful for anyone to willfully or knowingly, with the intent of intimidating or frightening people, causing panic or civil unrest….”

One of the terrorists, Luke Kuhn of the D.C. Anti-Fascist Coalition, was heard on the video threatening the D.C. government and the police:

“The message has to be, we do not recognize the city government either. If you try to close us down we will look for your house, we will burn it. We will physically fight the police if they try to steal one of our places. We will go to war and you will lose.”

For the video, see “Video evidence of the Left’s terrorist plans for Trump inauguration”.

Well, it looks like the D.C. police took the threats seriously by arresting three of the DisruptJ20 terrorists: Scott Ryan Charney (aka Scott Green), Colin Dunn and Luke Kuhn.

Scott Ryan Charney was the first to be arrested.

As reported by Andrea Noble of the Washington Times, Scott Charney was arrested on January 19, the night before the inauguration, for conspiracy to commit assault. Charney, 34, was one of the three men caught on Project Veritas’ camera.

Court documents indicate that police relied on the Project Veritas video, as well as emails sent between protest organizers, including emails sent by Charney to several individuals stating that he had conducted reconnaissance at the National Press Club, and believed his group “would be able to accomplish their objective ‘with no negative consequences for our side, nor any collateral damage.’”

On February 15, Project Veritas tweeted that Luke Kuhn and Colin Dunn had also been arrested:

Police should also look into Luke Kuhn’s pedophile activities, based on his writings that were unearthed by citizen journalists on Reddit.

“a burger loaded with E. Coli or Mad Cow disease will do a child far more damage than some seedy sexual encounter in the woods behind the school could ever dream of.”

“I have been a sexually-active bisexual since I was 12 years old…. Here in Montgomey County, MD, one of the things the Utopian Anarchist Party (a youth militia when you get right down to it) has been doing is running an underground railroad for runaways…. Keep up the good fight, for you are waging a holy war against the devils of psychiatry and minimum age laws…. I know one thing, if I had had parents who put me in a mental hospital for being Gay-or for being an anarchist, I would probably have burned them out for it.”

“I am writing in response to the lurid tales that have been circulating for the past week accusing the UAP [Utopian Anarchist Party] of running ‘child-pornography’ and other such commercial operations involving young people…. Yes, I did post a few articles to Boychat,which I found through a law-enforcement Web site. Why? What better place to post articles about the Mary Kay Latourneau case. Yes, I support the right of young people to CHOOSE to be sexually active if they so desire. As I stated in my original posts on the subject, I started having sex by my own choice when I was 12. My partner was 15 or 16. He asked first, but I kept going back for more-and never, ever regretted it.”