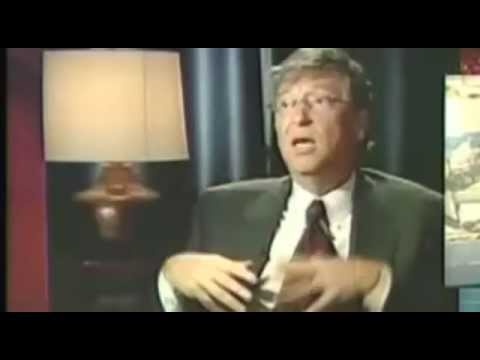 Bill Gates is the multibillionaire founder of Microsoft, whose net worth as of 2/19/2017 is estimated to be a mind-boggling $85.6 billion.

Via his eponymous foundation, Gates is also famous for his philanthropy, a word that the dictionary defines as “the desire to promote the welfare of others, expressed especially by the generous donation of money to good causes.”

One of the funding outlets of the Bill and Melinda Gates Foundation are vaccines for poor people in the Third World. From the Cambridge Dictionary:

Note that nowhere in the definition does it say vaccines are also a form of birth control or contraception.

So it’s most curious that in his speech on how to reduce global warming at the 2010 TED conference, Gates touted vaccines as a means to reduce the world’s population by as much as 10-15%. He said:

“The world today has 6.8 billion people. That’s headed up to about 9 billion. Now if we do a REALLY great job on new vaccines, health care, reproductive health service, we could lower that by perhaps 10 to 15 percent.”

I had thought that Gates’ vaccine remark was a Freudian slip or a slip of the tongue — a verbal mistake that reveals a repressed belief, thought, or emotion; something that you say that shows your true thoughts in a way that you do not intend.

But it turns out Bill Gates had made that remark of vaccines being a causal agent for population reduction at least FOUR times, as shown in this video:

Saying the same thing four times can no longer be called a mistake or a Freudian slip. It’s intentional.