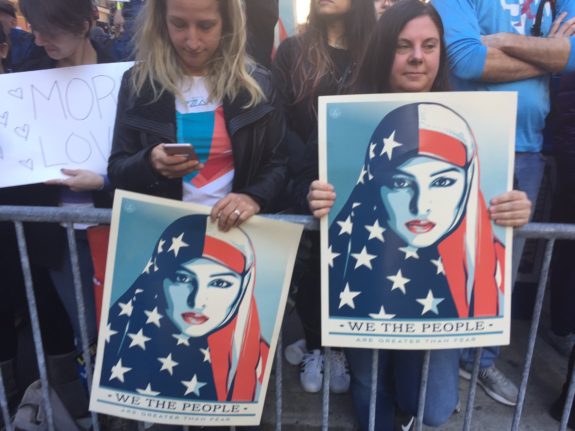 Leftists who attended the ‘I am a Muslim too’ anti-Trump rally in New York City yesterday heeded an Arabic call to prayer as “Allahu Akbar” was blasted through loudspeakers.

The clip shows left-wing protesters in hushed reverence as they listen to the call to prayer in Times Square while some hold up images of artist Shepard Fairey’s design of a woman in an American flag hijab.

“Allahu Akbar” means “God is great” or “Allah is greater” in Arabic, but it’s better known to westerners as a slogan routinely shouted by jihadists as they massacre innocent people during terrorist attacks.

The event included a speech by Linda Sansour, a Muslim activist and Hamas sympathizer who advocates for Sharia law – a brutal Islamist doctrine that completely disenfranchises women.

The video is similar in nature to scenes caught on camera during another anti-Trump protest in Berlin when self-proclaimed “feminists” paid homage to the most anti-woman belief system on the planet by shouting “Allahu Akbar” through a bullhorn as onlookers smiled and applauded.

While liberals bash Trump for his sexist comments made 12 years ago, they’re apparently completely comfortable in embracing a religious doctrine that treats women little better than farmyard animals in some Islamic countries.

This is yet another chilling example of how the left and political Islam – Islamism – are forging a closer alliance.

ISIS now writes in its own manifesto about plans to recruit far-left activists in the west because the two groups broadly share the same goal – the downfall of western civilization.

Anti-Trump Antifa rioters also displayed ISIS flags and beheading videos during this last month’s unrest at the inauguration in Washington DC in an effort to intimidate Trump supporters.

VIDEO: Larry Elder Goes Hard After Newsom, Says He ‘Slammed Down The Hopes And Dreams Of Californians’
The Political Cowboy