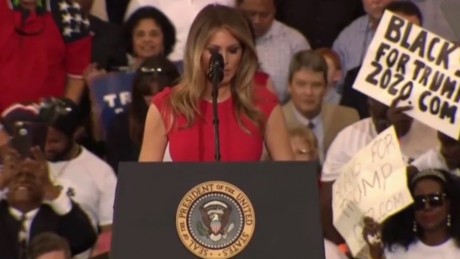 We just witnessed Melania Trump’s finest moment as First Lady so far.  After a week in which her husband declared war on the mainstream media, Melania absolutely electrified a huge crowd at a rally in Melbourne, Florida by reciting the Lord’s Prayer.  What Donald Trump had to share afterwards was remarkable as well, but that night will always be remembered for what Melania did.  After beginning with the phrase “let us pray”, Melania stunned the entire world by slowly but carefully leading the crowd in the Lord’s Prayer, and it is being reported that the assembled throng responded to her prayer with “thunderous applause“.

She did not pronounce all of the words perfectly, but that didn’t matter.

What matters is that her courage enabled her to create the most powerful moment that we have seen from a First Lady in decades.  The following is from a transcript of her remarks…

Our Father who art in heaven, hallowed is your name. Thy kingdom come, thy will be done, on earth as it is in heaven. Give us this day our daily bread, and forgive us our trespasses as we forgive those who trespasses against us.

‘Lead us not into temptation, but deliver us from evil. For thine is the kingdom and the power and the glory forever and ever. Amen.

If you have not seen footage of this incredible moment yet, you can watch it right here…

One of the primary reasons why this moment evoked so much emotion is because the Lord’s Prayer is undeniably a Christian prayer.

Over the decades, our politicians have become very adept at speaking of “god” in a very generic sense.  Even when they pray, most of our politicians are careful to use universal language that could apply to almost any religion.

That is why what Melania Trump did was so radical.  By reciting the Lord’s Prayer, she was clearly identifying herself as a Christian, and there was absolutely no question about who she was addressing.

It was such a simple prayer, but needless to say it sent liberals into a social media frenzy.  They started calling her every name in the book and used some of the most foul language imaginable.

In fact, if we are to have any hope of turning this nation around we desperately need the favor of God, and that is why what Melania Trump did was so important.

In her prayer, she asked for God’s will to be done on Earth just as it is done in heaven.

If we truly were to follow that course, there would be no limits to what we could achieve as a people.

But in order for that to happen, we must completely change direction as a nation, and Melania’s prayer was also a prayer of repentance.

The phrase “forgive us our trespasses as we forgive those who trespasses against us” was not a perfect quotation of the Lord’s Prayer, but it was immensely powerful.

By asking for forgiveness, that implies that we have done things that we need to be forgiven for.  And without a doubt, that list is very long.  We have killed tens of millions of babies since Roe v. Wade was decided in 1973, we produce more pornography than the rest of the world combined, sexual immorality of every kind you can imagine is running rampant in our society, our entertainment is mostly pure filth, and we have pushed God and His ways out of almost every corner of public life.

If we want to get on the right track as a country, one of the very first things that should be done is to defund Planned Parenthood.  The Republicans finally have control of the White House, the Senate and the House of Representatives, and so there are no more excuses.

If Donald Trump and the Republicans truly are “pro-life”, Planned Parenthood will be defunded in 2017.

But if it doesn’t happen, then they will share in the accountability for the Great American Holocaust, and the blood of every baby that is murdered from now on will be on their hands.

That is why this is one of the most important moments in American history.  If we don’t turn around now, I don’t think that we ever will, and choosing to go down the same path that we are currently on will only lead us to judgment.

So that is why I was so thrilled with Melania’s prayer.  By boldly identifying themselves as Christians, the Trumps are giving those of us that also consider ourselves to be Christians hope that a new day is ahead.

But it can’t just be words.  That is why what happens over the next few months is so incredibly important.

And of course the radical left is going to fight Donald Trump and his team every step of the way.  About a week ago, I wrote about the army of more than 30,000 activists that Barack Obama is commanding from his new home less than two miles away from the White House.  Well, now we have learned that Organizing for Action is going to be working with a network of other radical groups to disrupt town hall meetings all over the nation…

Progressive activists continue to take a cue from the Tea Party movement with plans to funnel into town hall meetings this week while members of Congress are at home and make a ruckus.

Groups, including President Barack Obama’s Organizing for Action, are turning to a newer organization, Indivisible Guide, to coordinate tactics.

Launched in December by former Congressional staffers, Indivisible is providing activists with training manuals, such as one that explains how to have a ‘successful’ town hall.

The progressives hate Trump and they want to keep this nation going down the exact same road that we were heading under Barack Obama.

We are literally in a battle for the future of America, and the outcome is still to be determined.

But what Melania Trump did when she stepped behind that podium was a major step in the right direction, and hopefully we will be seeing much more of that from her and Donald in the future.