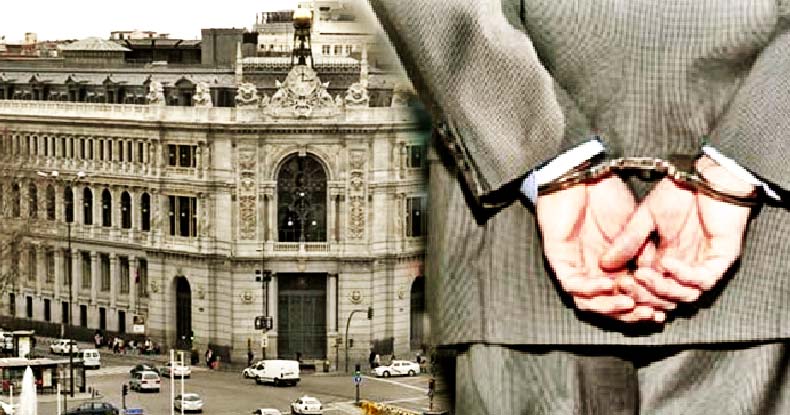 First, Iceland, and now Spain has taken on the Big Bankers responsible for financial calamity, as the country’s highest national court charged the former head of Spain’s central bank, a market regulator, and five other banking officials over a failed bank leading to the loss of millions of euros for smaller investors.

This, of course, markedly departs from the mammoth taxpayer giveaway — commonly referred to as the bailout — approved by the U.S. government ostensively to “save” the Big Banks and, albeit unstated, allow the enormous institutions to continue bilking customers without the slightest fear of penalty.

Errant bankers and financiers, it would seem, typically manage to either evade actually being charged, or escape hefty fines and time behind bars.

Spain’s Supreme Court last year ruled “serious inaccuracies” in information about the listing led investors to back Bankia in error, thus the bank has since paid out millions of euros in compensation.

But Spanish authorities could not abide the telling findings of a yearslong investigation into the failed listing, as Wolf Street explains,

“As part of the epic, multi-year criminal investigation into the doomed IPO of Spain’s frankenbank Bankia – which had been assembled from the festering corpses of seven already defunct saving banks – Spain’s national court called to testify six current and former directors of the Bank of Spain, including its former governor, Miguel Ángel Fernández Ordóñez, and its former deputy governor (and current head of the Bank of International Settlements’ Financial Stability Institute), Fernando Restoy. It also summoned for questioning Julio Segura, the former president of Spain’s financial markets regulator, the CNMV [National Securities Market Commission] (the Spanish equivalent of the SEC in the US).

“The six central bankers and one financial regulator stand accused of authorizing the public launch of Bankia in 2011 despite repeated warnings from the Bank of Spain’s own team of inspectors that the banking group was ‘unviable.’”

As AFP reports, “The National Court validated conclusions made by prosecutors who concluded that when ‘an unviable entity has been listed on the stock market, its administrators or auditor should not shoulder all the responsibility.’”

Specifics of the charges have not yet been made apparent, but as The Economist reports:

“The court is questioning why they allowed Bankia to sell shares in an initial public offering in 2011, less than a year before Bankia’s portfolio of bad mortgage loans forced the government to seize control of it. It said there was evidence the regulators had ‘full and thorough knowledge’ of Bankia’s plight. After its nationalisation, it went on to report a €19.2bn ($24.7bn) loss for 2012, the largest in Spanish corporate history.”

Internal emails and documents played a crucial role in ultimately bringing the central banking officials to task for the failure of Bankia — inspectors bringing issues to the attention of superiors were allegedly ignored. One email cited by the Economist came from an inspector who warned Bankia was “a money-losing machine,” for which an IPO would not solve.

Another report, deemed “devastating by the court,” saw an inspector advise Bankia to seek a private buyer rather than proceed with the listing.

An inquiry into “the participation of other players, such as officials in the central bank,” was also urged by the National Court.

As the Economist points out, Spanish judges are generally reluctant to sentence first-time financial criminals to prison; though five Novacaixagalicia executives had five-year suspended sentences — levied for embezzlement in 2015 — abruptly enforced in January.

Meanwhile, taxpayers in the United States have yet to see Big Bankers criminally responsible for the financial ruin of so many Americans brought to any semblance of justice for their wrongdoing.