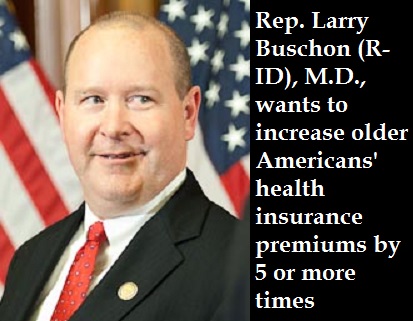 Did you know that at present, Obamacare makes it legal for insurers to charge older Americans a health insurance premium that’s three times more than what younger Americans pay?

That, of course, is tantamount to an age health tax.

To make matters worse, a new bill in Congress means to actually INCREASE it to as much as 5 times or more.

The bill is H.R. 708: State Age Rating Flexibility Act of 2017, the purpose of which is to amend title XXVII of the Public Health Service Act “to increase the permissible age variation based on age for health insurance premiums for coverage offered in the individual or small group market from a factor of three to a factor of five, or to a factor determined by the state.”

To top it off, this age-discriminatory bill was introduced by a Republican! — Rep. Larry Bucshon (R-Indiana). At present, there are no co-sponsors. On January 27, 2017, H.R. 708 was referred to the House Committee on Energy and Commerce.

According to a new study from AARP’s Public Policy Institute conducted by the independent actuarial firm Milliman, if H.R. 708 is passed, on average, adults age 60 and older would see their insurance bills go up by $3,200 — making their average annual premium a whopping $17,900.

“Seniors already spend one out of every six dollars on healthcare—they can’t afford to spend more.

A typical senior without insurance in the individual market has a median income of only $20,000. Asking moderate and middle income older Americans to pay over $3,000 more out of pocket for insurance will put a major squeeze on other necessities. And, this group is already dealing with added expenses from the high prices of prescription drugs.

Add to that the fact that many parents pay for their children’s insurance until they turn twenty-six, a bill many are happy to foot, but that certainly adds to their financial burden.”

LeaMond said this week, AARP launched a new campaign to stop the age tax that includes advertising and recess visits by AARP staff and volunteers to members of Congress in the states:

“Our latest efforts follow letters we have sent that lay out the negative impact of the age tax. The ads also come as an addition to AARP’s Medicare campaign, which takes on ‘premium support,’ a proposal that would harm Medicare beneficiaries by turning the successful program into a private voucher program.

We are encouraging our members to call their representatives in Congress at 844-617-2688 and urge them to oppose H.R. 708, the bill that would allow insurance companies to charge 50- to 64-year-olds thousands of dollars more for their health care. Remind Congress they should be standing up for their constituents, not insurance companies. You can also send a message to your Representative by going to the following website Opens a New Window. .