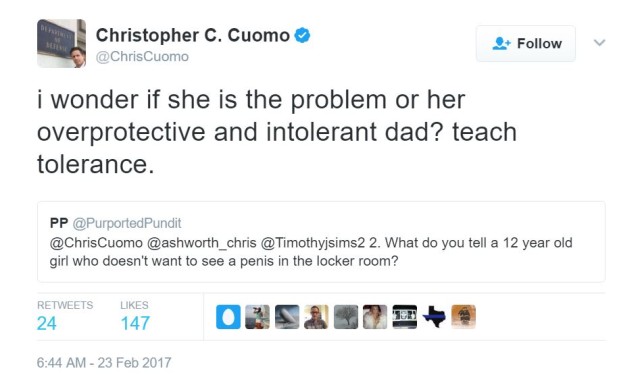 CNN host Chris Cuomo had a bizarre response to a question on Twitter earlier today when he suggested that an “intolerant” father would be to blame for a 12-year-old girl not wanting to see a penis in the locker room.

Cuomo was asked, “What do you tell a 12 year old girl who doesn’t want to see a penis in the locker room?”

He responded, “I wonder if she is the problem or her overprotective and intolerant dad? teach tolerance.”

The discussion was in the context of the Trump administration withdrawing Obama-era instructions that transgender students can choose to use the bathroom of the gender they identify with and not be restricted to their biological gender.

The CNN host is clearly suggesting that the 12-year-old girl not wanting to see the penis of a transgender individual (the age of whom was not mentioned) is the fault of her parents for educating her to be intolerant of transgenders.

“So because of liberal logic, parents need to show their little girls an adult male penis at so LGBT adult feels comfortable?” another Twitter user asked Cuomo.

“Are you thinking?” he responded.

Trump’s decision to rescind guidelines that instruct schools to allow biological males to use women’s bathrooms and vice-versa has pleased his conservative based but enraged LGBT activists, one of whom told CNN it was a “mean-spirited attack” on transgender students.