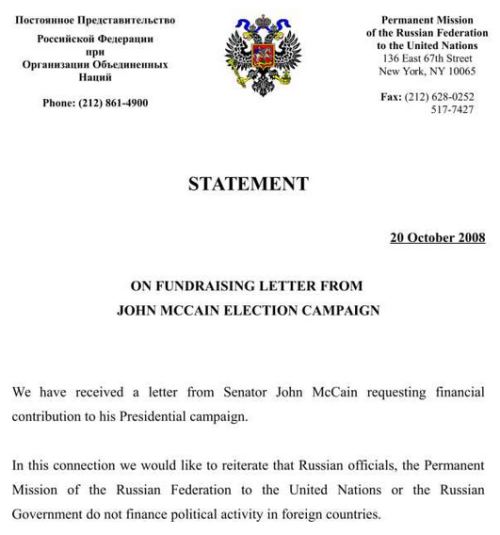 RINO senator John McCain (R-Arizona) was a diehard anti-Trumper in the 2016 campaign. McCain also went fully on board with the Obama administration and the MSM’s fake story that the Russian government had intervened in the election to favor Trump by hacking into and transmitting to WikiLeaks damaging Democrat emails — an assertion that remains unverified and unsubstantiated to this day. See:

Along with fellow Republican senator Lindsey Graham (SC), McCain is one of a bipartisan group of senators calling for an investigation into Russian hacking of the 2016 election to help Trump defeat Hillary Clinton. McCain is also a co-sponsor of the Russian Review Act that would impose strict new congressional oversight and veto power over the Trump administration if it decided to lift sanctions on Russia.

The irony is that according to documents obtained by WikiLeaks, it is John McCain who in 2008 had solicited a campaign contribution from Russia’s ambassador to the United Nations Vitaly Churkin. U.S. law forbids presidential candidates from seeking foreign donations.

The documents are two:

Below are screenshots of pages 1 and 4 of McCain’s letter:

(2) A Statement by the Permanent Mission of the Russian Federation to the United Nations, dated October 20, 2008:

“We have received a letter from Senator John McCain requesting financial contribution to his Presidential campaign.

In this connection we would like to reiterate that Russian officials, the Permanent Mission of the Russian Federation to the United Nations or the Russian Government do not finance political activity in foreign countries.”

Here’s a screenshot of the Statement:

WikiLeaks released the Statement on October 20, 2008, stating that “Wikileaks staff have verified the authenticity of the document.”

Vitaly Churkin was Russia’s Permanent Representative to the UN from 2006 until his sudden death in New York City three days ago on February 20, 2017, the eve of his 65th birthday. From Wikipedia:

The immediate cause was heart failure, according to Russian diplomat Sergei Ordzhonikidze.[16] The Russian Foreign Ministry noted that Churkin died while at work and expressed condolences to Churkin’s family.[17]

[…] On 21 February 2017 the New York City Medical Examiner’s Office released the preliminary results of an autopsy performed on Churkin, which states that the cause of death needed further study, which often indicates the need for toxicology tests.[19] The same day Churkin was posthumously awarded the Russian Order of Courage[20] and the Order of the Serbian Flag 1st class.