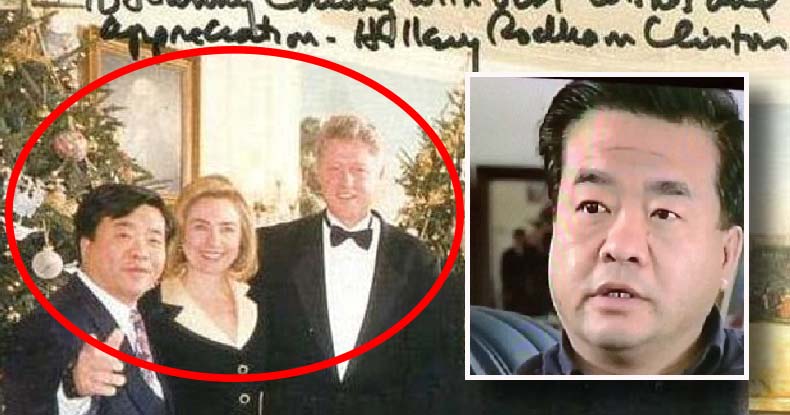 A Chinese-American businessman, who was ousted and convicted for his role in an illegal fundraising plot between China and the Clintons, made a secret tape because he feared being assassinated over what he knew. Portions of that tape were just released to the Daily Mail.

Before the Washington Post turned into a propaganda arm for the Clintonian deep state they used to expose them. In 1996, the DNC and the Clinton administration were exposed in an illegal campaign finance scheme, known as Chinagate. China’s role in this campaign finance scheme was exposed when Bob Woodward and Brian Duffy of The Washington Post published a story stating the Department of Justice investigation into the fund-raising activities had uncovered evidence that agents of China sought to direct contributions from foreign sources to the Democratic National Committee (DNC) before the 1996 presidential campaign.

These contributions from China were in direct violation of United States law forbidding non-American citizens or non-permanent residents from giving monetary donations to United States politicians and political parties.

When federal investigators discovered these illegal donations, they moved in to makes arrests. However, not a single DNC staffer nor either of the Clintons was arrested. Only Johnny Chung — the man who made the secret video fearing the Clintons would have him murdered — would take the fall.

As the Daily Mail reports,

In the never-before-released footage, Chung described how he feared for his life after he publicly admitted to funneling money from Chinese officials to President Bill Clinton’s 1996 reelection campaign.

He also claimed Democrats pressured him to stay silent about his dealings with the Clintons and said the FBI tried to enlist him in a sting against a top Chinese general at a Los Angeles airport.

After Chung agreed to cooperate with prosecutors on the Chinagate investigation, he feared his knowledge of the Clinton campaign finance scandal and the Chinese influence operation could make him a target for assassination.

The video was given to the Daily Mail by author and historian Doug Wead for his new book Game of Thorns, which, according to the Mail, traces Hillary Clinton’s unsuccessful 2016 campaign and the Chinese government’s long-running operation to buy political influence in Washington.

Chung “received a friendly visit from a retired government official, friendly with the FBI, who perhaps felt guilty about the treatment Chung had been given after agreeing to come forward and tell the truth,” reported Wead. “And so, with assistance from the former government official, Johnny Chung produced an elaborate videotaped testimony that was secreted to friends and family to be forwarded to the media in the case of his death.”

Bob Abernethy, a California software executive, was the man who interviewed Chung in the video. The two had become friends while attending the same church.

In an interview with the Mail, Abernathy noted that Chung recorded the film as a type of ‘life insurance’ before he testified to Congress.

“The reason Johnny asked me to do this interview with him was to make the information publicly available [in case of his death] and also as a type of ‘life insurance’ since he was very concerned about his safety,” said Abernethy.

“His concern about his safety was understandable, given that there had been three attempts on his life which required FBI protection… and given his knowledge of what happened to people such as Ron Brown, who as Secretary of Commerce, was deeply involved in arranging – and selling seats on – Clinton administration trade missions to China,” added Abernethy.

Brown was killed, along with 34 others, when his airforce plane slammed into a mountain over Croatia. Some have speculated that he was preparing to go public about this illegal Chinese campaign finance scheme just before his death.

After Chung blew the whistle, he and his family were placed under round-the-clock FBI protection. However, just a few days before Chung was set to testify before a grand jury, the FBI headquarters in DC called off the detail. Chung was told he was no on his own.

“I called the FBI office and offered to [speak with] the US assistant attorney again on the phone,” said Chung.

“And he said ‘Mr. Chung your case is over. As a normal American citizen, what do you do if you feel your life is in danger? You just call 911.”

Chung visited the White House 57 times in a two-year span – eight of these meetings were ‘off the books.’

During these visits, Chung would meet mostly with Hillary Clinton. In some of the meetings, he would hand checks directly to the Clintons’ chief of staff Maggie Williams, for tens of thousands of dollars.

After their illegal activities gained the attention of federal investigators, Chung spilled the beans and confessed that the money was coming from a top Chinese military official, who Bill Clinton met in person and an LA fundraiser.

To highlight just how high the Clinton’s influence and corruption spread, not a single person in the DNC was prosecuted for accepting the illegal funds — in spite of Chung’s prosecution and confession.

“It’s very strange that the giver pleads guilty and the givee gets off free,” said U.S. District Judge Manuel L. Real of the case. Strange indeed — unless one is familiar with the Clinton’s dark and secret history.

After Chung was snared in Chinagate, others soon followed suit, including Ng Lap Seng, a Macau billionaire tied to the Chinese government. Ng was accused of pouring $1 million into Clinton’s 1996 reelection bid. However, he escaped prosecution at the time.

This is when things get really weird.

While Ng escaped prosecution in 1999, in 2015, he was arrested for bribing a United Nations official. That official was the former president of the UN, John Ashe.

Ashe was due in court last summer appearing with his co-defendant Ng. However, he would never make it as he died. He was found dead in his private gym after having his throat crushed by a barbell.

As the Free Thought Project reported last year, adding to the intrigue surrounding Ashe’s death, an anonymous source who spoke the New York Post’s Page Six, said prosecutors had intended to use the fact that Ng had funneled money to the DNC during Bill Clinton’s presidency in an effort to link Ashe directly to Democrat front-runner Hillary Clinton.

As the Mail notes, in his book, Wead reports that the New York FBI office wanted to investigate Ng’s connections to the Clintons last year, but the case was shut down by the Obama administration’s Department of Justice.

And just like that, this entire case goes full circle with the corrupt Clinton family right in the center. But this is all just ‘conspiracy theory’, right?

Below is the clip from Chung’s anti-assassination ‘life-insurance’ video. The Mail was unable to reach Chung for an interview, but it is assumed he is living in China.