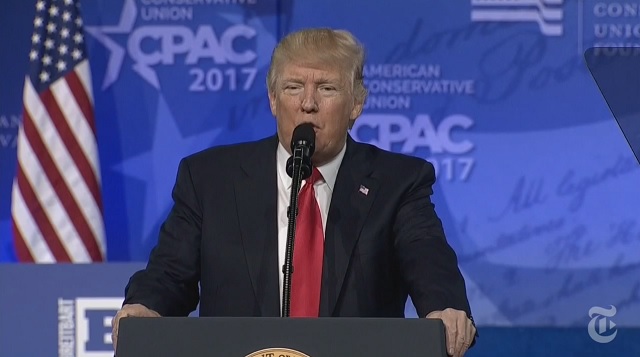 President Trump hilariously attacked the “fake news media” who “make up sources” and joked about CNN being the “Clinton News Network” on Friday at CPAC 2017.

“They make up sources. They are very dishonest people.”

“I’m not against the media,” Trump said. “I am against only the fake news media or the press. Fake.”

“I’m against the people who make up sources and make up stories.”

“A source said Donald Trump is a horrible human being? Let them say it to my face.”

“They shouldn’t use ‘sources.’ They should put in the name of the person. You’d see stories dry up like you wouldn’t believe,” he said.

Trump gave credit to the LA Times for polls that got it right in 2016, but said “so many polls” were wrong, including the “Clinton News Network.”

“They get upset when we expose their false stories.”

“The First Amendment gives Americans the right to criticize fake news, too.”

Trump may have been referencing a tweet from Joe Scarborough last week which really emphasized how the media simply makes stuff up off the top of their heads.

Trump tweeted out on Feburary 17th: “The FAKE NEWS media (failing @nytimes, @NBCNews, @ABC, @CBS, @CNN) is not my enemy, it is the enemy of the American People!”

The FAKE NEWS media (failing @nytimes, @NBCNews, @ABC, @CBS, @CNN) is not my enemy, it is the enemy of the American People!

Scarborough responded saying: “Only a FAKE PRESIDENT would declare the First Amendment to be the enemy of the American people.”

Only a FAKE PRESIDENT would declare the First Amendment to be the enemy of the American people. https://t.co/ZFZvlTf8Az

The top response on twitter pointed out how Schmo Scarborough made up a fake quote so he could knockdown a straw-man:

Pro-tip: if you don’t want to be called fake news, stop making up fake news.