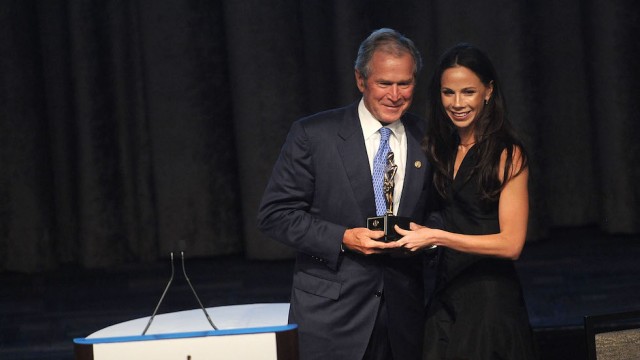 This is another reason why self-proclaimed “pro-lifers” in government cannot be trusted. They can’t even seem to pass on real pro-life values to their children. Barbara Pierce Bush, daughter of former President George W. Bush, has been announced to headline a Planned Parenthood fundraiser this coming week in Texas.

Bush is to be the keynote speaker at the Planned Parenthood of Greater Texas’s annual Fort Worth fundraising luncheon for an organization whose main business is the decapitation, dismemberment and murder of unborn children, and then selling the parts of those unborn children to other companies.

While Bush claimed he was pro-life during his time as Texas governor and President, the fact is that he did nothing to stop the funding of Planned Parenthood nor reverse the Roe v. Wade decision. He did sign a partial birth abortion ban, but that was also filled with loopholes and no teeth, and as we know from the Hermit Gosnell trial, even after birth abortions were being performed.

So, while this may come as a shock to many in the pro-life movement, it shouldn’t. Why? It’s because Bush’s mother, Laura, has expressed her support for abortion on numerous occasions. She also supports redefining marriage to include homosexuals.

The ex-first lady also told King she believes abortion should remain legal, an opinion she suggested she held on the President Bush’s first day in office in 2001.

On the day of George W. Bush’s first inauguration, the first lady sat down with CBS’ Katie Couric who “asked two questions about abortion, and then she asked me if I was for the overturn of Roe versus Wade… This was the very morning my husband was about to be inaugurated. And I thought, do I really want to start my husband’s presidency, you know, suggesting that a Supreme Court rule being overturned? And I said ‘no.'”

Laura Bush said abortion should “remain legal, because I think it’s important for people, for medical reasons and other reasons.”

Mrs. Bush said she was “not really” expressive about same-sex marriage and abortion when she lived in the White House. She said she and her husband talked about both issues, but were not “argumentative.”

This is more of the lie that has been promoted regarding abortion, one which her daughter is now carrying forward in full view of everyone. The Texas Tribune also points to an interesting connection in all of this.

The lead donor of the luncheon is Sid R. Bass, the prominent Fort Worth billionaire.

Bush’s health organization is, according to its website, a nonprofit that “mobilizes a global community of young leaders to build the movement for health equity.” It partners with organizations overseas to place fellows in year-long tenures promoting world health. Several Planned Parenthood branches are among those organizations.

There’s a strong Texas connection in all of this: The president of the Planned Parenthood Federation of America is Cecile Richards, the daughter of the late Texas Gov. Ann Richards.

Bush’s father ousted Richards from the Governor’s Mansion in 1994. Many political observers viewed that campaign as — at least in part — revenge for Richards’ acerbic 1988 Democratic National Convention keynote speech mocking the GOP nominee. It was Bush’s grandfather, George H.W. Bush.

Well, isn’t that interesting? And the Bushes stem from a line that has been entangled with all sorts of questionable behavior including Operation Paperclip, which funneled Nazis over from Germany following World War II, and their ties to Skull and Bones and Bohemian Grove.

The Bush family has presided over the American holocaust of abortion longer than any other family in America, having three presidential terms in office.