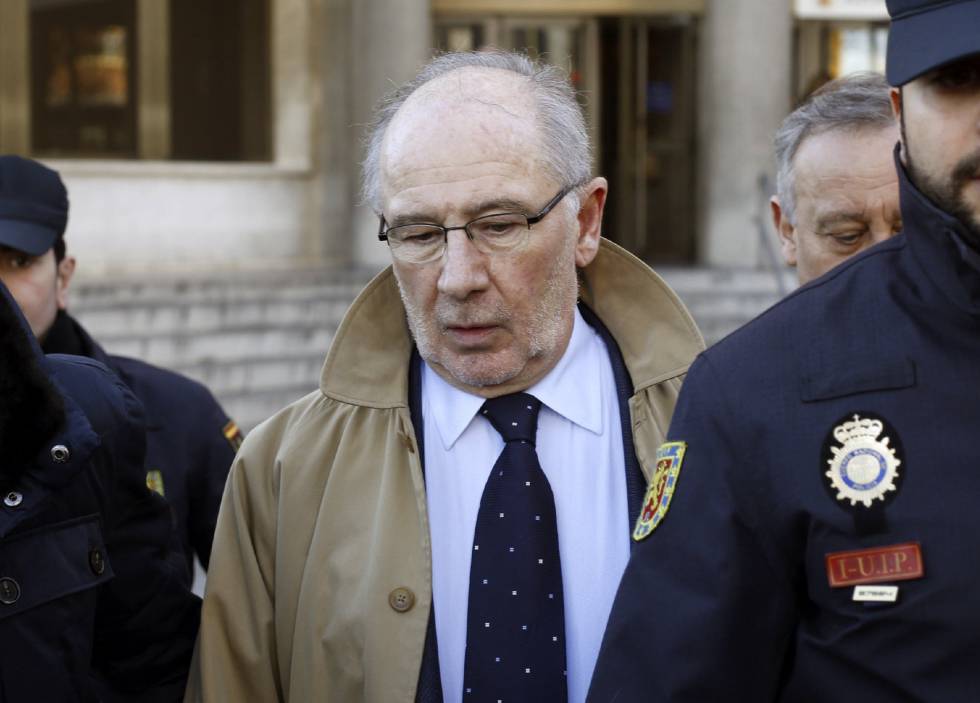 In many other countries, excluding the United States, corrupt bankers are often brought to task by their respective governments. The most recent example of a corrupt banker being held accountable comes out of Spain, where the former head of the International Monetary Fund (IMF), Rodrigo Rato, was sentenced to four years and six months behind bars.

According to the AFP, Spain’s National Court, which deals with corruption and financial crime cases, said he had been found guilty of embezzlement when he headed up Caja Madrid and Bankia, at a time when both groups were having difficulties.

Rato, who is tied to a slew of other allegations, was convicted and sentenced for misusing €12m between 2003 and 2012 — sometimes splashing out at the height of Spain’s economic crisis, according to the AFP.

The people of Spain were outraged over the scandal as it was discovered during the height of a severe financial crisis in which banks were receiving millions in taxpayer dollars. Bankia was eventually nationalized and given €22 billion in public money.

Although he was sentenced, Rato, who is also a former Spanish economy minister, remains free pending a possible appeal because of his highly connected elite status.

Rato was brought down in a massive effort by Spain to get rid of corruption within the banking system. The problem had gotten so bad that Spain decided to clean house, and 65 people, including Rato, were brought to task.

According to the AP, they were accused of having paid for personal expenses with credit cards put at their disposal by both Caja Madrid and Bankia, without ever justifying them or declaring them to tax authorities. These expenses included petrol for their cars, supermarket shopping, holidays, luxury bags and parties in nightclubs.

According to the indictment, Rato maintained the “corrupt system” established by his predecessor Miguel Blesa when he took the reins of Caja Madrid in 2010, reports the AFP. He then replicated the system when he took charge of Bankia, a group born in 2011 out of the merger of Caja Madrid with six other savings banks, prosecutors said.

Rato was economy minister and deputy prime minister in the conservative government of Jose Maria Aznar from 1996 to 2004, before going on to head up the IMF until 2007. His subsequent career as a banker was short-lived — from 2010 to 2012 — but apart from the credit cards case, it also led to another banking scandal considered the country’s biggest ever.

Thousands of small-scale investors lost their money after they were persuaded to convert their savings to shares ahead of the flotation of Bankia in 2011, with Rato at the reins. Less than a year later, he resigned as it became known that Bankia was in dire straits.

The state injected billions of euros but faced with the scale of Bankia’s losses and trouble at other banks, it asked the EU for a bailout for the banking sector and eventually received €41bn.

Rato and others were probed, accused of misleading small investors in the listing of Bankia, which has since paid out €1.2bn in compensation.

To highlight the utter corruption within the banking cartel that is the IMF, Rato is the third former chief to be ousted for illegal activity.

Christine Lagarde, who took over from Strauss-Kahn and is the current IMF chief, was found guilty in December of “negligence” for approving a massive government payout to business tycoon Bernard Tapie during her tenure as French finance minister.

Despite being found guilty of corruption, Lagarde was not sentenced to a single day in jail. She has since been meeting with Trump’s Goldman Sachs-connected Treasury Secretary, Steven Mnuchin, noting that they’ve had “some very positive discussions.”