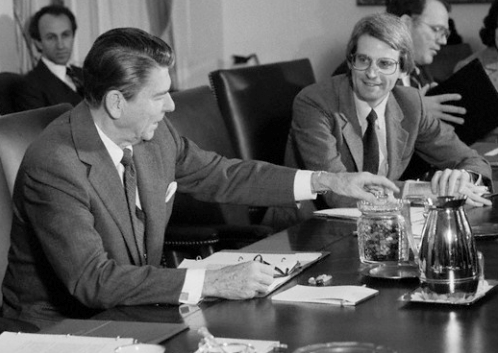 Though many financial pundits make the argument that the U.S. economy is booming as a result of millions of new jobs, a healthy housing market and record stock market levels, former Reagan budget director David Stockman  says that the next few months will see fiscal, financial and economic upheaval.

In a recent interview with Greg Hunter’s USA Watchdog, Stockman argues that President Trump’s stimulus packages will be ground to a halt as the U.S. debt ceiling is once again breached in March. The resulting uncertainty could lead to widespread panic on Wall Street.

The trigger, says Stockman, will be a debt ceiling crisis on or around March 15, 2017, which incidentally, just happens to be the same day that the Federal Reserve is supposed to hike interest rates:

In a typical month we have 250 to 300 billion in revenue coming in… that will easily cover the debt service for a month… that will readily cover social security and other critical payments… but when it comes to paying grants to state and local governments, contractors, or the Army Corp of Engineers, or the Pentagon, or a whole range of other activities, if you don’t have the cash you put the bills in the drawer…

I think that is what’s going to shock the system… and it will scare the living bejeezus out of Wall Street and financial markets because then you won’t have a sudden clarification or resolution to the problem.. and that could go on for days and weeks.

This is going to be a maelstrom like we’ve never seen before and the markets are not even remotely prepared for this… Fundamentals don’t matter anymore… nothing is being discounted… it’s all raging robo-machines and day traders thinking that somebody is going to come to their rescue no matter how  absurd the bubble gets or how extended the whole system becomes.

The fall out will be fast and unprecedented in its scale:

I see [President Trump] as the great disruptor… I don’t see him as someone who is going to bring about a solution… We have to have the system blow up first for all practical purposes… I think he does not yet understand the magnitude of the problem… the incorrigibility of what he’s inherited.

…He doesn’t realize that this problem he is inheriting is a thousand times greater than anything he ever imagined… this is a monster.

Everything leaks and we’re learning in the Trump administration they’re as leak-prone as any I have seen… so it’s all going to leak out… and the stock market…the casino… is going to begin to realize the fact that there is no plan…there is no big fiscal stimulus… the whole system is heading into some kind of crash landing and that’s going to change the manic delusions that are underway today.

But Stockman says that some assets will survive the coming crash, which could see well in excess of 20% drops in stock market prices. Physical assets like gold and silver, including precious metals resource companies, may see prices go to new highs when investors shift to safe haven assets amid the panic:

There will be a dash for the only solid monetary asset left in the world, which is gold… The gold market is tiny compared to the size of the financial system… It only will take a small shift into the asset of last resort to make the price of gold really start to soar.

The best thing to do is be patient and be long gold… it will pay off handsomely when the crisis really intensifies and hits ground zero.