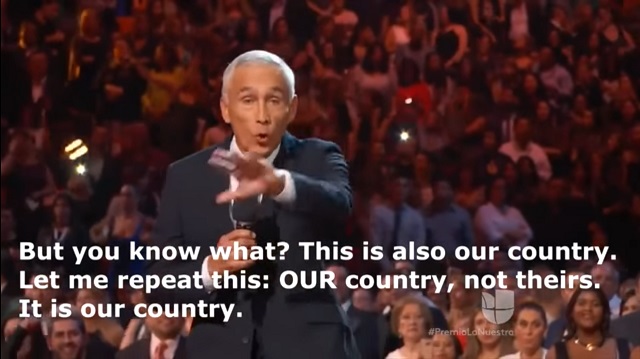 Univision anchor Jorge Ramos told a Latino audience at a Univision Music Awards show on Thursday that the US is “our country, not theirs.”

“There are many people who do not want us to be here, and who want to create a wall in order to separate us,” Ramos said at the Premios Lo Nuestro awards. “But you know what? This is also our country. Let me repeat this: OUR country, not theirs. It is our country. And we are not going to leave.”

If you wanted to read about the “bold statement” on Univision’s website for English consumption, you’d find it’s not there as they deceptively edited the quote from “our country, not theirs” to “our country, not just theirs.”

The latter is less likely to tip off Americans that he and Univision owner billionaire Haim Saban appear to be trying to lead a Latino insurrection.

Further ramping up his open opposition to President Trump’s immigration law enforcement policies, Univision anchor Jorge Ramos has let loose with an outrageous tirade that could best be described as equal parts nationalistic identity politics, racially-driven demagoguery, and yet another instance of the irresponsible conflation of legal and illegal immigration.

Here’s how the Univision/Fusion anchor kicked off his participation in the 2017 edition of the network’s annual entertainment awards show, Premios Lo Nuestro (“Our Awards”):

JORGE RAMOS, SENIOR NEWS ANCHOR, UNIVISION: I am an immigrant, just like many of you. I am a proud Latino immigrant here in the United States. My name is Jorge Ramos, and I work at Univision and at the Fusion network. And you know exactly what is going on here in the United States. There are many people who do not want us to be here, and who want to create a wall in order to separate us. But you know what? This is also our country. Let me repeat this: OUR country, not theirs. It is our country. And we are not going to leave. We are nearly 60 million Latinos in the United States. And thanks to US, the United States eats, grows and, as we’ve seen today, sings and dances. So when they attack us, we already know what we are going to do. We are not going to sit down. We will not shut up. And we will not leave. That is what we are going to do.

Premios Lo Nuestro is usually just a nice bit of entertainment for fans of the many different genres of Latin music…not unlike the Billboards or the CMAs. However, as we saw during last year’s pre-election RiseUp concert and GOTV rally, Univision is increasingly mixing politics and entertainment – and that’s how we end up with Ramos as a presenter at a music awards show.

Ramos’ speech is amazingly strident, with an “us against them” tone that one would not expect from someone who incessantly promotes diversity from the other side of his mouth.

Ramos’ statement sounds like an outright declaration of war. He is ordering foreign nationals who are here illegally to fight deportation and refuse to leave, while simultaneously saying this is “our country, not theirs.” Two weeks ago it was reported in the Wall Street Journal that influential Mexicans are calling for their citizens here illegally to jam our courts.

As the WSJ reported:

Influential Mexicans are pushing an aggressive and perhaps risky strategy to fight a likely increase in deportations of their undocumented compatriots in the U.S.: jam U.S. immigration courts in hopes of causing the already overburdened system to break down.

The proposal calls for ad campaigns advising migrants in the U.S. to take their cases to court and fight deportation if detained. “The backlog in the immigration system is tremendous,” said former Foreign Minister Jorge Castañeda. The idea is to double or triple the backlog, “until [U.S. President Donald] Trump desists in this stupid idea,” he added.

Mr. Castañeda is part of a group of Mexican officials, legislators, governors and public figures planning to meet with migrant groups Saturday in Phoenix to lay out plans to confront the Trump administration’s deportation policy.

Mexico’s government hasn’t endorsed the strategy or the group’s Phoenix mission. But it recently allocated some $50 million to assist undocumented migrants facing deportation, and President Enrique Peña Nieto has instructed the country’s 50 consulates in the U.S. to defend migrants.

Last year in October, Jorge Ramos celebrated whites becoming a minority in America and said it was “beautiful.”

Ramos told RT’s Larry King that a “Latino revolution” means “the future of the United States is California, it is Texas, it is New Mexico. Those are three states in which already, right now, more than 50% of the population is composed by minorities.”

“So, in other words,” Ramos said, “the future of this country will be composed solely by minorities.”

“It is a beautiful American experiment, in which everyone is embracing, not only immigrants, but minorities. The white supremacists, the racist groups, the Ku Klux Klan, the alt-right, they hate that, and they’re fighting really hard right now to prevent that,” he said.