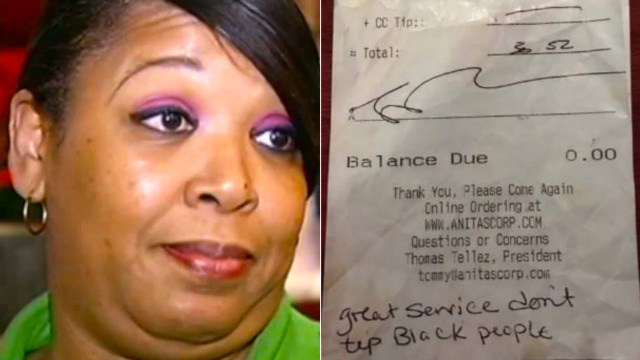 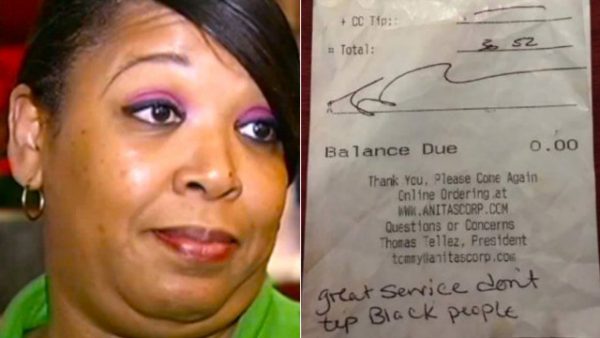 A racist note allegedly handed to a black waitress by a white man in Virginia last month was fabricated, according to a lawyer for the man accused.

Kelly Carter, a waitress at Anita’s New Mexico Cafe in Ashburn, Va., claimed that a white man stiffed her on his $30.52 restaurant bill and wrote “Great service, don’t tip black people” at the bottom of his receipt.

…[Attorney Daniel Hebda] said in a statement Friday that his client did leave Carter a small tip — one penny — because her service was poor, not because she is black.

“Our client did not nor would he ever write anything about refusing to tip African Americans because of their race,” Hebda said, according to WTOP.

“Our client has no ill feelings towards African Americans. Our client did not leave a $0.00 tip. Our client tipped $0.01 out of his own conviction against tipping well for poor service.”

Hebda said that his client did write on the receipt, but only the message “terrible service.”

Websites like the Huffington Post, Raw Story, the Daily Mail, the New York Daily News and others posted the story as an example of racism in America. The Loudon County NAACP became involved, and a Virginia man opened up an online fundraiser that brought in more than $3,600 for Carter.

Carter’s boss, Tommy Tellez, said last month, after Carter reported the receipt, that customers were showing up to the restaurant and just “dropping cash off” for the waitress.

Not mentioned in the article is the timestamp was reportedly different on both receipts.

One look at the handwriting should make it clear it’s written by a woman.

Fortunately, only liberals got fleeced.